This report covers conditions and observations made between Monday, June 3 and Sunday June 30, 2013. The next report is scheduled for Monday, August 5, 2013. However, in the event of any significant occurrences prior to that date, this site will be updated as soon as possible. 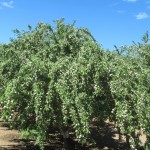 An usually wide range of conditions were reported during the month in the Sacramento Valley; from record setting heat to a winter-like storm that delivered a modicum of rain. Maximum temperatures spiked quickly during the first days of the period, rising from the upper 70’s and lower 80’s to as high as 108 degrees by Saturday, June 8. Highs approached the 110-degree mark as a heat wave enveloped the state during the period’s closing days.

Observers are reporting that the rainfall during the period increased the potential for foliar fungal diseases, particularly Alternia. Accordingly, some growers with particularly susceptible plantings have treated to prevent infection.  However, with the beginning of the hull split, grower’s attention has turned toward the various pre-harvest tasks. First among the items to be completed is treatment for Navel Orange Worm, NOW, in orchards planted to susceptible varieties. 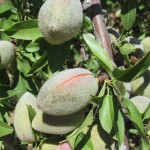 Splitting hulls of the Nonpareil almond

The beginning of the hull split also heralds a period of more intense water management by those wanting to decrease the incidence of fungal hull rot infections. Given the heat wave currently baking the region, growers must work a delicate balance of withholding water to 50% of the tree’s consumptive use in order to reduce moisture levels within the splitting hulls, while not subjecting the crop to undue stress. University research shows that a mild stress for approximately two weeks at the initiation of hull split can greatly reduce the incidence of infection. Growers have been working to stretch their water supplies all season long and will return to their normal irrigation pattern after a two-week period.

Vegetation on the orchard floor must be managed prior to shaking in order to ensure efficient nut removal during the harvest. Observers are reporting that shaking of the first orchards to be harvested should begin during the first days of August.

Vegetation on the orchard floor must be managed 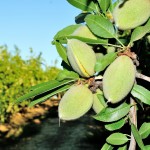 The central region experienced a wide range of temperatures during June, with intense heat during the opening and closing days of the period and mild, unseasonably cool readings during the middle of the month. Daily maximum temperatures reached as high as 108 degrees on June 8, then dropped sharply into the mid 70’s to upper 80’s for much of the period.

The hull split of the Nonpareil has begun in the central region. With the initiation of the hull split, growers are shifting their attention towards Navel Orange Worm, NOW, management and the upcoming harvest. Growers have begun hull split treatments to control NOW in orchards requiring control. They are also monitoring populations of web-spinning mites and hoping that early treatments with preventative materials targeted at damaging species will hold in the face of the heat wave baking the region as the period concluded.

While observers have noted that there are few problems caused by web spinning mites so far this year, some growers in the region have suffered from the affects of Bacterial Spot. This bacterial infection was first spotted in the California in Colusa County in 2006 and has been reported to cause significant losses to the Fritz variety in Australia in past years. The most serious infections have been observed in San Joaquin County, with Stanislaus and Northern Merced also reporting infections. So far, the disease has focused on the Fritz variety. However, observers have noted that the Nonpareil is also beginning to show signs of the disease in the most severely impacted plantings. Caused by a bacterial infection, Bacterial Spot is not susceptible to the disease-controlling fungicide materials growers normally employ. The disease is capable of causing significant crop losses and growers with infected plantings are very concerned. 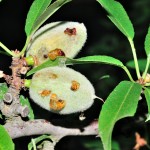 With the initiation of the hull split, growers will withhold irrigation to one-half of consumptive use for a two-week period in an effort to reduce susceptibility to hull rot fungal infections. Given the heat wave impacting the region as this report is being prepared, growers will be working a delicate balance between wanting to reduce the amount of moisture within the splitting hull while not inducing an excessive amount of stress that can adversely impact the weight and quality of the crop. Obviously, growers will be monitoring their orchards closely as the hull split progresses.

We anticipate that shaking of the first orchards along the west side of the region will begin prior to the end of July.

Water supplies have become a prime concern among growers in the southern San Joaquin Valley. Water deliveries from the Chowchilla and Madera Irrigation Districts began during the month, providing some degree of relief for grower’s deep wells in those areas. However, the Fresno Irrigation District has announced that it will curtail deliveries to its Fancher and Dry Creek Divisions at mid-July. Observers are reporting that growers in the Madera and Fresno Districts anticipate having surface water available until harvest, but will have to resort to their private wells to complete the growing season. Deliveries to those drawing their water from the federal Central Valley Project remain at 20% of contracted amounts. Ominously, these growers have also been told that if the state receives only a normal snowpack during the upcoming winter, there will be no deliveries during the 2014 irrigation season. Growers in the federal system typically transfer water from fallowed lands they own in order to help meet their crop needs. However, should the threat of a “zero” allocation come true, no transfers will be possible next year and growers will be totally reliant on their privately owned deep wells. Growers continue to service existing wells as their pumping levels drop. Drillers report that they are extremely busy, servicing existing wells as well as preparing new sites, particularly in the Madera County area.

Water quality is also become a bit of an issue under the pressure of rising salinity levels recorded in grower’s private wells. As visible in the photo below, observers have noted increasing leaf burn in salt sensitive varieties. 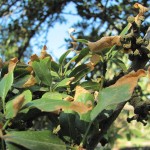 Observers have noted the start of the Nonpareil hull split.  Treatments to control Navel Orange Worm, NOW, began in the Kern and Tulare County areas on June 20, with growers farther to the north following shortly thereafter. Growers are also monitoring soil moisture levels closely as they work to withhold irrigation to one-half of consumptive use for a two-week period in an effort to reduce the incidence of fungal hull rot infections, while not imposing undue stress on the trees. This delicate balance is made much more difficult by the heat wave currently enveloping the entire Central Valley.

Observers are reporting that growers in the Madera and Fresno County areas have had relatively few difficulties with web-spinning mites, with a few orchards having populations building to levels requiring treatment. The same cannot be said for those in the Tulare and Kern County areas, who have been engaged in a pitched battle. Observers are reporting that growers there have been unable to adequately control infestations and many plantings are covered with webbing. Growers report that dust covering the trees as a result of the winds the region has experienced this year has reduced the efficacy of miticide treatments and allowed populations to grow to damaging levels. Some have had to make multiple treatments to prevent their orchards from being defoliated. 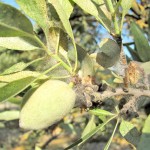 The next few weeks will find growers completing final pre-harvest preparations. Observers are reporting that shaking of the first orchards to be harvested should begin prior to the end of July.