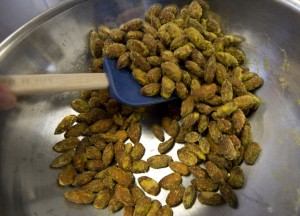 Really, how many food products can you make with almonds?

Not nearly enough, according to officials of Blue Diamond Growers, which on Thursday formally opened its 6,500-square-foot Almond Innovation Center amid its sprawling complex of buildings along C Street in Sacramento.

The center is intended to lead Blue Diamond’s efforts to develop new almond products. The company also laid down a welcome mat for global food companies that want to explore the potential benefits of almond products worldwide.

Working in comparatively humble labs, Blue Diamond research and development workers have been developing almond products that previous generations might have considered unlikely – everything from nondairy beverages to Blazin’ Buffalo Wing-flavored almonds in a can.

He said the cooperative, owned by 3,000-plus growers, has introduced a dozen new almond products in the United States alone over the past six months. Another dozen are set to debut in the next six months.

Now, development will be done in a pristine center that resembles a hybrid of a massive hotel kitchen and a top-tier medical research facility. The center is stocked with exotic-looking devices to measure taste, shelf life, pH levels, flavor coatings and much more.

Blue Diamond’s ability to churn out new almond-based products has served it well.

Almonds are the state’s No. 1 food export – with China and Hong Kong topping the destination list, importing 236 million pounds of California almonds in 2011-12 – and Jansen said the strength of almond shipments “is directly attributable to new uses for almonds that our cooperative has created.”

With a smile, Jansen said Thursday that the co-op’s product expansion plans have been so aggressive that the company is upping the ante expressed in its iconic 1986 TV commercials featuring almond growers waist-deep in almonds saying, “A can a week, that’s all we ask.”

“Now,” Jansen said, “we’re asking for a can a week, a bag of Nut Chips and a carton” of almond milk.

Also evident on Thursday was the number of public officials on hand, expressing their gratitude that a Sacramento-headquartered enterprise employing nearly 1,000 here is adding to its local operations.

In past years, public officials feared that Blue Diamond might move farther south into the heart of the Central Valley. Those concerns were raised in the fall of 2011 when Blue Diamond purchased 88 acres of land in Turlock and subsequently started building a major manufacturing and processing facility.

However, Blue Diamond spokeswoman Susan Brauner said Thursday that “we’ve always been committed (to Sacramento) … Clearly, Blue Diamond has invested in building its global capabilities and located its Almond Innovation Center in Sacramento.”

Brauner noted that limited room to expand some manufacturing operations in Sacramento prompted Blue Diamond to seek other places to handle that workload.

The first phase of the three-phase Turlock project is scheduled to be completed in May, with about 100 new hires and 200,000 square feet devoted to manufacturing and delivering almond products worldwide.