Skip to content
HomeBlue Diamond Almonds - NewsStuart Leavenworth: Can we grow jobs by getting back to our roots?

This story is taken from the Sacramento Bee 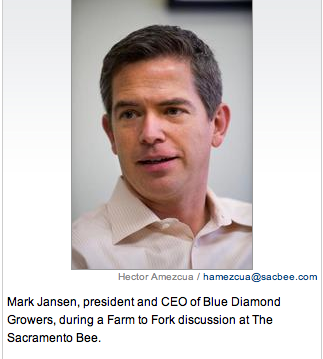 Over the past year, the Sacramento region has cooked up a grand dialogue on its farm-to-fork future. Two areas of focus: What is the potential for helping local farmers grow more food for the local market? How can we make it easier for people to eat healthy, and eat local?

Yet there is another question that has received far less attention: What is the potential for Sacramento to be seen as a food destination and as source of food products that are world famous?

To explore those questions, I invited six food and tourism leaders to join me for lunch at The Bee, in the third of our farm-to-fork round tables. Around the table (which was more rectangular than round) was a mix of expertise, hailing from Sacramento, Placer and El Dorado counties.

The first order of business was to discuss the region’s successes, both as a food capital and a source of respected food brands.

Increasingly, our region is seen as a top-shelf producer of olive oil, wine, sushi rice, caviar, mandarins, walnuts and almonds. Part of that success has come from innovative marketing of new products. But part of it has come from growing consumer interest – nationally and worldwide – in healthy foods grown in California, a brand in itself.

“There’s this really powerful idea that if something is grown in California, it is going to be healthier, greener, tastier,” said Mark Jansen, president and CEO of Blue Diamond Growers, a Sacramento-based agriculture cooperative that is the world’s largest processor and marketer of almonds. “That’s a trend that gives us some real advantages as we stretch and move out.”

In Blue Diamond’s case, it has been developing new niches for almonds, such as almond milk and rice-nut chips, a wheat free product that appeals to people with food allergies. Jansen, who became CEO three years ago after a career working for large food companies, said he was attracted to Blue Diamond partly because of the “healthiness” of almonds, but also because of its 3,000 growers. “It’s nice to be part of a business where you know who your owners are,” he said.

Along with exporting much of its bounty abroad, the Sacramento Valley increasingly is attracting visitors who want to sample the region’s wine and food, and perhaps meet the farmers or vintners who produced it. Wineries in Amador, El Dorado, Sacramento, Yolo and other counties attract tens of thousands of visitors on a typical weekend.

“The thing about the wineries in our region, they are still very much like the wineries in the Napa Valley in the ’60s,” said Joanne Neft, a cookbook author and Placer County’s former agriculture marketing director. “I remember taking a picnic lunch and buying a bottle of wine and sitting out on the grass. That’s the kind of atmosphere we have here that is pretty much lost in Napa Valley.”

Apple Hill is possibly the largest single food destination for visitors from the region and outside. Every year, this collection of orchards, wineries, pumpkin patches and Christmas tree farms in El Dorado County attracts an estimated 750,000 visitors, according to the Apple Hill Growers Association.

Apple Hill has become so big that many Apple Hill residents and visitors gripe about weekend traffic jams and crowds, particularly at this time of year. Even so, Christa Campbell, president and owner of Rainbow Orchards, said that many Apple Hill tourists keep coming back, many relishing the chance to interact with farmers or engage in a little fruit picking.

“That’s the attraction of Apple Hill – the orchards,” Campbell said. “They come out and sit in the orchards. They can pick apples. There are pumpkins. They can just sit and relax. During the week, when it is not so busy, I have some time to actually interact with people. Many people say, ‘My grandparents lived on a farm.’ ‘What happened to it?’ ‘It’s gone now.’”

During our round-table discussion, one word kept popping up – “authenticity.” People shopping for food, or attending a food festival, winery or farm stand, are looking for the real thing, not a commercial knockoff. The Sacramento region attracts about 15 million visitors a year, and while there are no numbers on the people who come here primarily to visit wineries or have a culinary experience, it’s clear that the Sacramento region has barely tapped the opportunity to make itself more of a food destination.

“We are in the infancy stages,” said Sonya Bradley, chief marketing officer for the Sacramento Convention and Visitors Bureau. Still, she said, we have much more to work with than many metropolitan areas.

“A lot of what we talk about from the marketing perspective is the authenticity of this area,” she said. “I think that is why certain businesses survive and some don’t. There’s just a feel to Sacramento that is real and translates so well.”

That authenticity is also a point of debate. To ensure that farming is the primary economic engine of a rural area, several counties have established restrictive agricultural zoning rules. Those rules make it difficult for farm families to set up bed-and-breakfasts on their properties, preventing them from supplementing their farm income with the kind of agritourism that has become popular in Italy, France and many other countries.

“If your land is zoned agriculturally, it is very difficult to get (a bed and breakfast) in,” said Ann Wofford, association secretary of the Apple Hill Growers Association and owner of Wofford Acres Winery. But El Dorado County, she said, is working to relax some of those restrictions, while ensuring that lodgings don’t displace farming as the primary use of rural lands.

It is a balancing act. All of us know of tourist areas that started out cute and quaint, but quickly became successful and soon became commercial caricatures of themselves. Up in Apple Hill, additional lodgings could make the area more of a year-round destination, and less of an in-and-out kind of experience. But a plethora of bed-and-breakfasts could drive up land prices and then attract hotel chains and casinos.

If not handled right, the whole area could look like … South Lake Tahoe.

For food to be a long-term economic engine in the region, the grass-roots forces that created the farm-to-fork effort have to be creative, and vigilant. They have to experiment, and they have to be in it for the long haul. Apple Hill didn’t attract 750,000 visitors the first year. It took 50 years to build the tourist draw that is now Apple Hill.

As Sacramento celebrated its farm-to-fork week last month, nearly everyone thought the Bridge Dinner – with 600 people enjoying a local dinner on the Tower Bridge, connecting Sacramento with Yolo County – would generate a big buzz. It did.

But another event that week – a cattle drive through Sacramento – drew equal or even greater national attention.

“The effect of the whole week was amazing,” said Patrick Mulvaney, chef and owner of Culinary Specialists and Mulvaney’s B&L. “The cattle drive in particular prompted phone calls to me from Texas, North Carolina, Florida and Minnesota. Friends were saying, ‘Hey, I saw this stuff going on in Sacramento. What is this about?’”

What is it about? We don’t know. The region is just starting to create it.