Data from the first reporting period of the 2012 California almond crop shows the industry shipped 139.6 million lbs. for August, 25% above the same month last year.

August, shipments in the U.S. market are up 11%. Shipments to Asia are up more than 50%. China continues to drive growth with an August number 200% of last year’s shipments. The EU and Middle East are also showing strong early shipments.

With a modest increase in beginning inventory and the 2.1 billion lb. NASS estimate for the 2012 crop, the industry supply cannot sustain the early increase in activity.

This year, the Nonpareil crop is substantially lighter than last year’s record and my early projection is that Nonpareil volumes will be well below the NASS forecast of a 7% decline.  Moreover, lower moisture in the 2012 crop creates processing issues, which are adversely affecting yields of Nonpareil Extra #1.  Early sellers of this crop over-committed on quality and sizing of NPX, leaving California handlers reluctant to make large additional commitments.  Nonpareil pricing has risen consistently in the last few weeks.

Commitments through August are lower than the prior year by 18%, reflecting California handler’s reluctance to make large early Nonpareil commitments in the face of early data indicating a limited Nonpareil crop.

The outlook for global almond demand remains strong, and rising prices will result, as a relatively flat supply will limit growth this year. 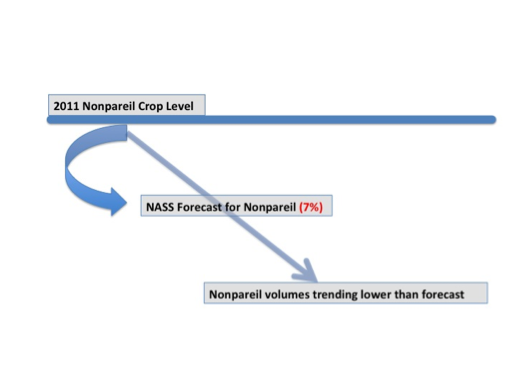