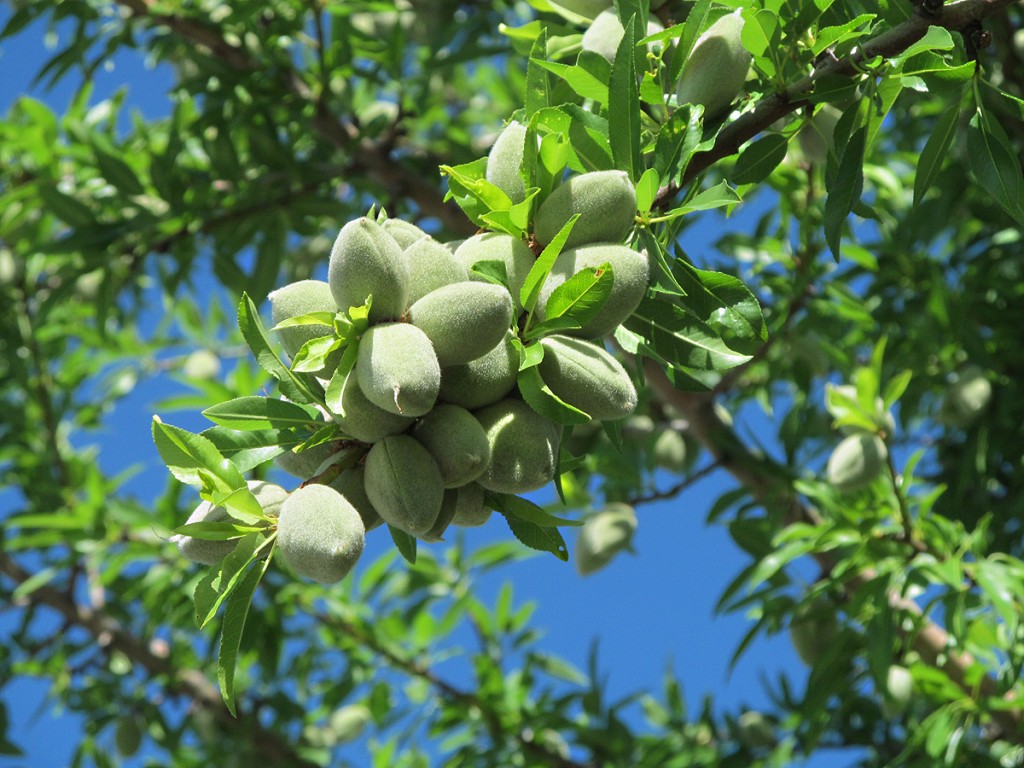 The next scheduled report will be posted on April 29, 2013. In the event of any significant occurrences prior to that date, this site will be updated as soon as possible.

Rainfall returned to the region during the closing days of March and first week of April as a diffuse weather system moved across the Central Valley from the west. Official rainfall totals ranged from 0.8 inch to as much as 1.2 inches. Blustery north winds blew across the region in the wake of the rain with sustained speeds reported excess of 25 mph and gusts reaching over 40 mph. Fortunately, the winds were well forecast and almond growers were able to alter their irrigation schedules, which helped to enhance their tree’s stability. While some degree of nut loss was reported and some almond trees were blown-over, observers are reporting that the losses due to the winds were minimal.

Observers are reporting excellent growth and development of the 2013 almond crop in the Sacramento Valley. The predominately above normal temperatures the region has experienced this year has promoted rapid growth since the completion of the bloom and equally rapid sizing of the nuts for this point in time. Nuts that failed to be pollinated have already fallen from the trees, no doubt aided by the blustery winds and the trees have now begun to shed those nuts that they are unable to support to harvest.

Owing to the predominately dry weather experienced this year, no signs of springtime fungal diseases have been observed. However, growers have begun treatments to susceptible plantings having a history of the summertime diseases Scab and Rust, which must be completed prior to infection. Growers have also been busy fertilizing their orchards to ensure adequate fertility levels and controlling weed growth in and around the orchards. While irrigation plans were altered during the period, the rainfall received did not significantly reduce the need for irrigation and growers in all areas have been working to maintain their orchard soils at adequate moisture levels.

In the coming weeks, growers will step up their irrigations as temperatures rise. All will be monitoring the insect populations within the orchards closely, both pest and beneficial species in order to maintain the highest possible quality at the lowest possible cost.

Rain swept across the region from the west during the last week of March and first week of April. Official rainfall totals for the period ranged from 0.8 inch to 1.5 inches. However, almond growers reported additional amounts falling from heavy, but isolated downpours that roamed through the region. Particularly heavy rainfall fell in areas of western Stanislaus and San Joaquin County on Sunday, March 31st as a strong storm cell moved from south to north through the area. While almond growers reported hail that damaged apricots south of Tracy, no damage was observed in the area’s almond orchards.

Blustery winds dominated the weather in the days following the storm’s passage with sustained speeds in excess of 25 mph and gusts reported as high as 40 mph. While almond growers reported some crop loss due to nuts being knocked from the trees, tree losses were minimal as the winds were well forecast and growers had held off irrigations in order to provide more stability for their trees.

Observers are reporting that the 2013 almond crop is developing well with little to no adverse impacts from the damp, windy conditions experienced during the period. Nuts of all varieties have broken free from their jackets and are growing well. As described in previous reports, nuts that were not pollinated have been shed from the trees and orchards are now entering a second period of shedding where nuts that the trees are unable to sustain to maturity are also being cast to the ground. Growers are commenting that the above normal temperatures the region has experienced this year has resulted in excellent growth rates, producing good nut sizing for this point in time.

Growers have been busy scheduling irrigations and fertilizer applications as they work to support the developing almond crop. The rainfall the region received provided only a small reduction in the need for irrigation and growers have been working diligently to maintain adequate soil moisture levels.

Observers have noted that the symptoms of Non-Infectious Bud Failure are visible in many Carmel plantings this year.  A non-infectious genetic disorder, the condition significantly reduces crop loads and dramatically alters the growth and development of the tree.

While there is little to no evidence of disease at this point, growers are treating for the summer-time fungal diseases, Scab and Rust in plantings having a history of infection. Treatments to control these diseases must be completed prior to the start of infection. Significant, but fortunately isolated infestations of Oblique Banded Leaf Rollers have been spotted along the west side of the region.  Almond growers are monitoring their orchards for signs of Leaf-Footed Plant Bugs that can be expected to move in from surrounding grasslands as these areas dry out. Growers will pay particular attention to their Sonora, Fritz and Aldrich plantings as they are preferred by this potentially damaging insect. Reports of high trap counts of Navel Orange Worm in the southern region have increased grower vigilance for this insect as well. Growers and Pest Control Advisors will be monitoring the situation and evaluating the best control practices should trap populations indicate that early season controls are warranted. For the first time, growers have a pheromone trap available to attract male adult Navel Orange Worm moths. This provides growers with a very valuable tool in managing the prime insect pest of almonds. 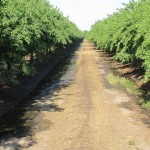 Weather in the southern San Joaquin Valley turned a bit cloudy and windy during the period, with rain reported during the final week of March and first of April. Morning low temperatures remained at comfortable levels, with readings reported predominately between the mid 40’s and low to mid 50’s. While the preponderance of daily maximum temperatures were reported in the 70’s, coolest readings in the upper 60’s were recorded on the cloudier, wetter days with warmest readings reported under clear skies in the lower 80’s.

Some degree of rainfall was reported in all areas of the region, with 0.2 to 0.4 inch reported in the Madera and Fresno County areas. Precipitation was a more sparse in the region’s southern areas where official reports placed totals between a few hundredths of an inch to as much as 0.25 inch. As with the northern and central growing regions, blustery winds blew through the southern San Joaquin during the first week of April, particularly in the northern half of the region. Sustained speeds in excess of 20 mph were reported in Madera and Fresno County, with gusts reaching in excess of 35 mph in the windier areas. While observers reported some degree of nut loss and blown-over trees, the overall losses have been minimal.

Observers are reporting excellent nut development under the near-perfect growing conditions. While the winds and rain received during the period caused growers to alter their work plans, there have been little to no adverse impacts on the almond crop. Growers have been fertilizing and irrigating their orchards to support the developing crop and spent the days following the blustery winds removing blown-over trees and broken branches from the orchards. Irrigation schedules were altered in advance of the winds as growers worked to provide better anchoring for their trees.

Irrigation has become a prime concern for the region’s growers as they face restricted supplies of surface water from irrigation districts. This has increased reliance on privately owned deep wells. Almond growers have been re-working existing wells and preparing additional wells as they struggle to ensure adequate water supplies. Some have reported rising bicarbonate levels in the water supplied by their wells, which can be toxic to the trees. Nut development and tree health to this point in time is reported as being quite good. The above normal temperatures the region has experienced this year has resulted in excellent growth rates and nuts that are quite well sized for the date.

While little to no evidence of infectious disease is found in the region’s orchards at this time, almond growers are treating plantings with a history of Scab and Rust infections. Treatments for these potentially serious summer-time fungal diseases must be completed prior to the visible infection can be observed and growers have begun treatments to their most susceptible plantings.  There have been reports of Leaf-Footed Plant Bugs in the Sanger area of Fresno County. Almond growers are monitoring their orchards for signed of this potentially serious pest, particularly in their Sonora, Aldrich and Fritz plantings, which the insect prefers. Growers in Madera County have also reported increasing activity of web-spinning spider mites. While not at treatable levels, growers will be monitoring their orchards, hoping that predatory insect populations can maintain mite levels below economic thresholds. Pest control advisors are reporting very high counts of Navel Orange Worm in the typically used egg traps. For the first time, growers and their advisors have the ability to deploy pheromone traps to monitor Navel Orange Worm adult populations within the orchards, which will be very useful in timing proper treatments to control this serious pest.

Almond growers with plantings of the Carmel variety have noted that Non-Infectious Bud Failure has become quite pronounced this year, with most of the region’s planting showing some degree of symptoms. Delayed and altered growth are typical symptoms, which can significantly reduce crop loads. The Carmel is most susceptible to this genetic disorder, which never gets better once it’s expressed in the tree.

Growers will spend the next month intent on meeting their orchards water requirements in order to safely get the crop to harvest.