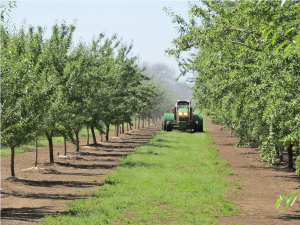 The headlines have been unavoidable. Almonds have been painted as our state’s “thirstiest” crop but what these stories lack is context. Blue Diamond’s management team has been collaborating with industry experts to communicate the facts about agricultural water use to the media and our urban neighbors.

According to a recent editorial in San Jose Mercury News, “California’s dams and reservoirs were never envisioned to release water year-round for environmental objectives such as aiding the delta smelt or reintroducing salmon in the San Joaquin River watershed. A majority of reservoir water once intended for households or farming is simply sent out to sea.”

Clearly our solution to California’s water situation will require a collaborative effort among all Californians to find a solution that makes sense for everyone.

The drought debate continues as we enter the hot, dry summer of the Central Valley, with mandatory water restrictions now in place throughout our state. For many Californians that means the drought will now affect their day-to-day lives. Millions of urban Californians will have to join agriculture in the fight to save water and push for storage to protect our future. Governor Brown’s mandate made it clear that all Californians need to do their part to conserve our most precious resource, and yet the media firestorm aimed at agriculture, and almonds specifically, has been fierce.

Our message has been simple: all food takes water to grow.

California’s agricultural abilities are second to none. In fact, according to the California Department of Food and Agriculture (CDFA), nearly half of our country’s fresh fruits, nuts and vegetables come from California. And CDFA reports that from 1967 to 2010, California agriculture has increased revenue and decreased total applied water use by 20 percent! In order to achieve such an impressive statistic, access to a consistent water supply is key. The amount of water required for California farming to grow our food is only 40 percent of captured water with environmental projects taking the majority at 50 percent. The often-quoted 80 percent ignores any water used for environmental purposes.

I have read suggestions that agriculture has been let off the hook by the governor’s mandate. Here are the facts: in 2014 farmers received only 5 percent of their contracted State Water Project allocation and 0 percent from the Federal Central Valley Project. This year, farmers are projected to receive 20 percent of State Water Project allocation and again, 0 percent of Federal Central Valley Project water. Our farmers have been feeling the effects of this drought from the very beginning.

Some have questioned whether agriculture’s economic impact justifies the amount of water used by the industry. The media points to agriculture’s 2.8 percent GDP, but again, this figure lacks context. It does not tell the whole story. Getting our food from farm to fork involves an interconnected supply chain, undoubtedly contributing significantly more than 2.8 percent to the state’s economy. The almond industry alone contributes 104,000 jobs to California, 97,000 of which reside in the Central Valley, and over 37,000 additional jobs throughout the supply chain.

Speaking of almonds, there are 9 million acres of farmland in California and almonds account for 12 percent of that total while only using 8 percent of the water currently used for agriculture. Almond crops produce more than just the kernels humans eat, which provide an efficient source of a heart-healthy, plant-based protein. The almond crop also produces hulls and shells that provide feed and bedding for livestock animals. Almonds rank No. 1 in California for food exports out of the state, with North America consuming four times more almonds than any other country. Our industry is a global driver of $11 billion in economic activity for California!

In the last 20 years, California almond growers have reduced the amount of water required to grow a pound of almonds by 33 percent. Nearly 70 percent of almond growers use micro-irrigation systems and more than 80 percent use demand-based irrigation scheduling. No one in the world can produce a high-quality almond as efficiently as we can in California!

In times of crisis, there are people who look for someone to blame. Almonds were the first target. Through sharing a few facts about our water stewardship, the media tide has turned to more balanced reporting. As the weather continues to warm into the summer, I expect agriculture will continue to field questions from our urban neighbors about water. Rest assured that Blue Diamond is committed to collaborating with our industry peers, water and environmental experts, consumer groups, regulatory bodies, and policy makers to establish a water policy that makes sense for all Californians – rural and urban, Central Valley and coastal, producers and consumers.