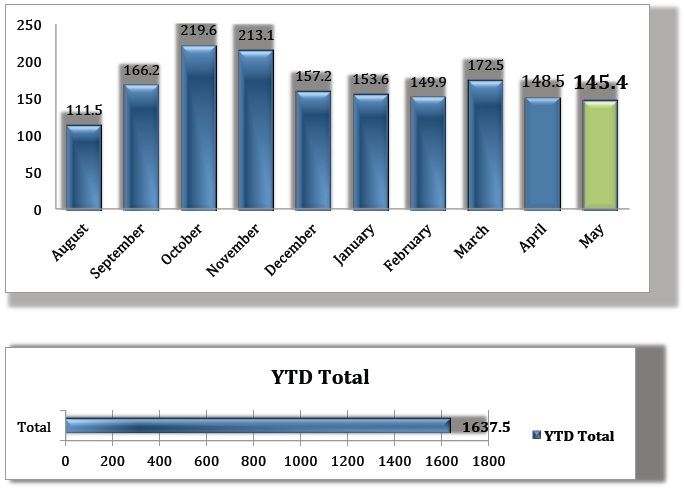 Did you know, over the past 2 years the average price of almonds has grown by 35 cents? Each of these years, almond sellers have been rewarded with higher prices by holding inventory and selling later in the year. Once again, late in the season, we have the best prices as the industry realizes that this year’s record 2-billion-pound-plus crop is being comfortably digested with continued growth in demand.

Hot off the press …shipments now stand at a 15% increase, with May growing at 12%.

New commitments of 88 million lbs. are exhausting supplies. With 25% of the year remaining, less than 12% of the available crop supply remains uncommitted.

Carryout inventory projects to less than 300 million lbs., or less than an eight-week supply. The transition into new crop Butte and California varieties will be especially tight. Over the summer, we will see some slowdown in shipment growth as a result of these shortages.

In May, I reviewed the Thailand market and then continued on to Singapore for the annual INC meeting. This was a very productive trip, even if there was very little new crop selling. The current view amongst buyers and sellers is that the 2012 crop is between 2 billion and 2.2 billion pounds. Even with this consensus, California handlers remain reluctant to discount the new crop, as anything less than 2.2 billion would be inadequate to meet normal demand growth. On June 29, the NASS Objective Estimate will gel industry expectations and set the tone for strong summer sales activity.

Ending on that high point. Join me each month as we explore the latest almond news from California and the world.