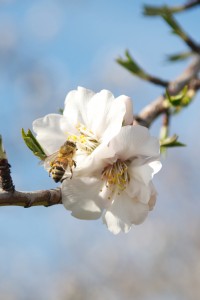 Tuesday delivered another clear day in the Sacramento Valley with not a cloud in the sky. However, as one observer reported, the strong winds returned to the region with a vengeance. Morning lows in wind sheltered locations were reported in the low to mid 30’s, while breezy conditions in most of the region held minimum temperatures a few degrees higher. Daytime highs were widely report in the mid and upper 60’s. Winds were once again the dominant feature of the day’s weather with sustained winds of 10 to 15 mph and gusts in excess of 25 mph reported throughout the region.

Observers reported that the warming temperatures and bright sun provided ample reasons for the bees to leave their hives. However, their efforts were impaired by the winds and observers reported only 5 to 6 hours of fair to good activity for the day.

The Sacramento Valley’s bloom continued its strong development, even as the brisk winds tugged at the trees. Observers reported that the Sonora and Peerless were shedding a few petals due to the action of the winds, even as these early blooming cultivars continued on the path towards their peak bloom. All varieties have made a strong move into bloom over the past 48 hours. In addition to the Sonora and Peerless, the Nonpareil, Carmel, California types and Monterey all have the majority of their buds either open and available for pollination or in the popcorn stage, poised to open.  Late blooming Butte and Padre are also moving into bloom with a significant proportion of their buds currently in the popcorn stage.

Growers with water available continue to irrigate their orchards.  Some have commented that sensors in the orchards are reporting adequate moisture levels deep in the root profile. However, moisture levels from the surface down to a depth of two feet have been reduced and growers are irrigating to restore moistures to their proper levels. Growers are also mindful that any water used for frost protection in the coming weeks will also go towards increasing soil moisture levels and are careful not to apply more water than is needed at this time.

Blustery conditions returned to the central region on Tuesday, buffeting the orchards with wind speeds in excess of 25 mph during the middle of the day in the northern areas of the region. Light breezes at sunrise buffered morning’s minimum temperatures in many areas of the region, holding reported lows predominately in the upper 30’s, while wind sheltered areas dipped a few degrees lower. While afternoon highs were reported in the mid 60’s around the region, the blustery winds imparted a pronounced chill to the air, making the apparent temperatures seem much colder.

While the bees did put in a full day’s work in the orchards, “flight operations” were impacted by the windy conditions, impeding the intensity of their efforts in the windiest locations, particularly along the west side. Accordingly, observers reported 6 to 7 hours of fair to good activity for the day, with best activity reported in the southern areas of the region.

The bloom in the central region is becoming more diverse with each passing day. Many Sonora plantings along the west side of the region are now at or near their peak bloom. This is also the case with advanced examples of the Fritz, even as younger, more vigorous plantings are displaying as little as 20% open bloom.  Observers in the along the Highway 99 corridor and along the eastern foothills are also reporting a wide diversity in the bloom, but not as pronounced as is visible along the region’s west side.

Nonpareil and the California type varieties have moved ahead strongly over the past two days. The California types lead the Nonpareil and now have a majority of their flowers open and available for pollination. Across the region, the Carmel has been progressing a bit more deliberately and is running just behind the Monterey. As shown in the third of today’s photos, advanced examples of the Butte along the west side are now just beginning to display a few open flowers.

The windy conditions failed to deter growers from their daily labors. Tractors could be seen pulling mowers through bearing orchards and crews could also be observed installing irrigation systems in newly planted orchards. Those with new orchards cold also be found pulling scrapers and orchard floats through the fields, smoothing the floors of the new plantings.

The blustery winds that buffeted the northern and central regions on Tuesday failed to reach into the southern San Joaquin. As a result, growers in the southern region enjoyed a clear, warm day with excellent opportunities for pollination. Morning low temperatures were widely reported in the mid and upper 30’s while daytime highs reached into the mid and upper 60’s. Following a relatively slow start as morning temperatures increased from their minimum values, bee flight operations were unimpeded and observers reported 7 to 8 hours of very good activity within the region’s orchards.

Clear skies and calm conditions dominated the weather in the southern region on Tuesday, providing excellent conditions for the developing bloom.  The Sonora variety is now, on average, at or near its peak bloom with advanced examples beginning to shed petals from the trees. California type varieties continue to lead the Nonpareil, with a majority of the buds in this grouping either open or in the popcorn stage. The Monterey is also poised to make a strong move into bloom and while leading the Carmel, is exhibiting excellent overlap with the Nonpareil. Observers are now reporting the first measurable proportion of open flowers in the Butte variety. As is normally the case, this late blooming type is leading the Padre, which has a significant proportion of its buds in the pink tip stage and has just begun to move into the popcorn.

While some growers have opted to apply preventative fungicides to their most susceptible varieties, the vast majority of growers are withholding treatments at this time, due to the lack of rain as the petals have emerged. Foliar nutrient sprays are being made, however, as growers work to support the developing flowers.