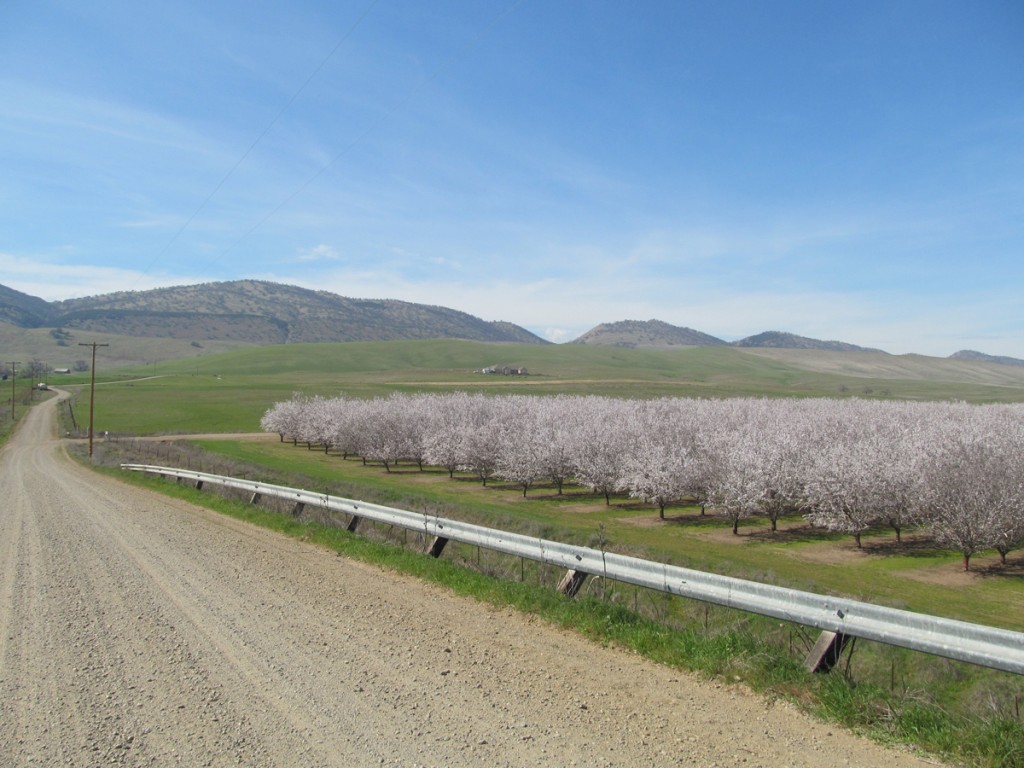 In contrast to the previous night, when minimum temperatures dropped into the upper 20’s, lowest readings on Thursday morning were widely reported in the mid 40’s. Temperatures warmed quickly as the morning progressed, reaching their highest values of the day in the lower 70’s. Owing to the warmer minimum temperatures, bee flight operations began earlier in the morning and continued throughout the day, with observers reporting a total of 8 hours of excellent activity in the orchards.

Thursday’s nearly perfect weather conditions provided strong support for the bloom and the bees daily activities. Observers have reported that the Sonora has now passed its peak bloom and has started its evolution into petal fall. The various California type varieties are all running ahead of the Nonpareil this year and as an aggregate, are now presenting a majority of their flowers for pollination. These varieties have made a strong surge ahead over the past 24 hours under the influence of the warm overnight temperatures. As in the San Joaquin Valley, the Monterey is leading the Carmel this year and is overlapping well with the Nonpareil. Late blooming Butte and Padre both have the vast majority of their buds in the pink tip and popcorn stages and can be expected to move steadily into bloom over the weekend should the warm temperatures continue.

Growers have begun preventative fungicide applications due to forecasts of rain in the coming week. Spray rigs will crawl through the region’s orchards throughout the night as growers work to ensure adequate protection against fungal diseases.

Thursday delivered another day of bright sun, light breezes and warming temperatures for growers in the central region. Morning lows dipped only into the upper 30’s throughout the region, while daytime highs reached into the lower 70’s.  High, wispy clouds soared over the region during the day, adding accent to the sky, but providing no interruptions for the bees, which put in a full 8 hours of very good to excellent activity in the orchards.

The warming temperatures have increased the pace of bud development in the northern San Joaquin Valley, promoting a surge in the bloom in many orchards around the region. Advanced examples of the Sonora have passed their peak bloom and have begun shedding petals. This early blooming variety is known for holding on to its petals quite firmly after pollination and as may be seen in the first of today’s photos, there are a number of flowers still holding all five petals, even though the flower is no longer viable. Strong movement has been observed in the Nonpareil, Carmel, Monterey and California type varieties as the buds move aggressively from popcorn into bloom. While all varieties are exhibiting quite a bit of diversity in the amount of open bloom visible, the late blooming Butte and Padre serve as a rather stark example of the variation in development visible in the region. Some advanced plantings are presenting as much 30% open bloom in the Butte and 15% in the Padre while other orchards are totally “dark” with no open flowers visible.

As the bloom continues its evolution, green leaves are also starting to emerge and increase in size.

Growers could be seen preparing spray rigs for a long night in the orchards. The forecast of several days of rain in the coming week, coupled with the amount of open bloom, as well as the increasing amount of exposed leaf area is driving grower’s actions. Given that virtually all available remedies work on the basis of disease prevention, rather than eradication, fungicides should be applied prior to the start of infection. Spray rigs could be seen entering orchards at sunset in many areas of the region as growers worked to ensure adequate protection against disease in orchards at the most susceptible stages of development. Growers prefer to treat their orchards during the night time hours, avoiding the times that the bees are the most active and taking advantage of calmer conditions in the orchards.

Clear, bright skies and comfortable temperatures blessed the southern San Joaquin Valley on Thursday, providing another day of good support for the 2013 bloom. Morning low temperatures were reported predominately in the upper 30’s, with warmest locations dropping only into the lower 40’s. Temperatures recovered nicely as the morning progressed, driving the bees from their hives fairly early in the morning, with readings reaching into the upper 60’s and lower 70’s by mid-afternoon. Observers reported that a steady hum of activity could be heard in the orchards as the bees put in 8 hours of excellent activity foraging upon the open flowers.

Observers have reported that the bloom has made an aggressive leap ahead over the past 24 hours, with a strong progression from pink tip through popcorn and into bloom. The Sonora has moved beyond its peak bloom and is now moving into petal fall. Meanwhile, the Nonpareil presents a particularly wide variation in development within the region. While some plantings have a majority of their flowers open for pollination, others have only a few scattered open flowers. Observers are reporting that this variation is particularly evident in orchards in Kern County, although observers in other areas of the region are reporting similar variation. As noted in previous reports, in spite of the wide degree of variation between orchards, observers are reporting that the overlap between varieties within orchards is quite good.

Continuing the trend established as the buds entered their earliest stages of development, California type varieties are leading the Nonpareil and now have a majority of their flowers open and available. Monterey is leading the Carmel, with both having adequate overlap with their associated Nonpareil. Strong movement has also been noted in the Butte and Padre, with both having a majority of their buds in the pink tip stage, poised to move through the popcorn stage and into bloom in the next few days.

Growers have begun spraying operations in the more advanced orchards in anticipation of potentially inclement weather toward the middle or end of next week.  Growers are also irrigating to support the new crop and to mitigate the very dry soil conditions.  Observers have noted that the moisture profile in most plantings is very low at this time.