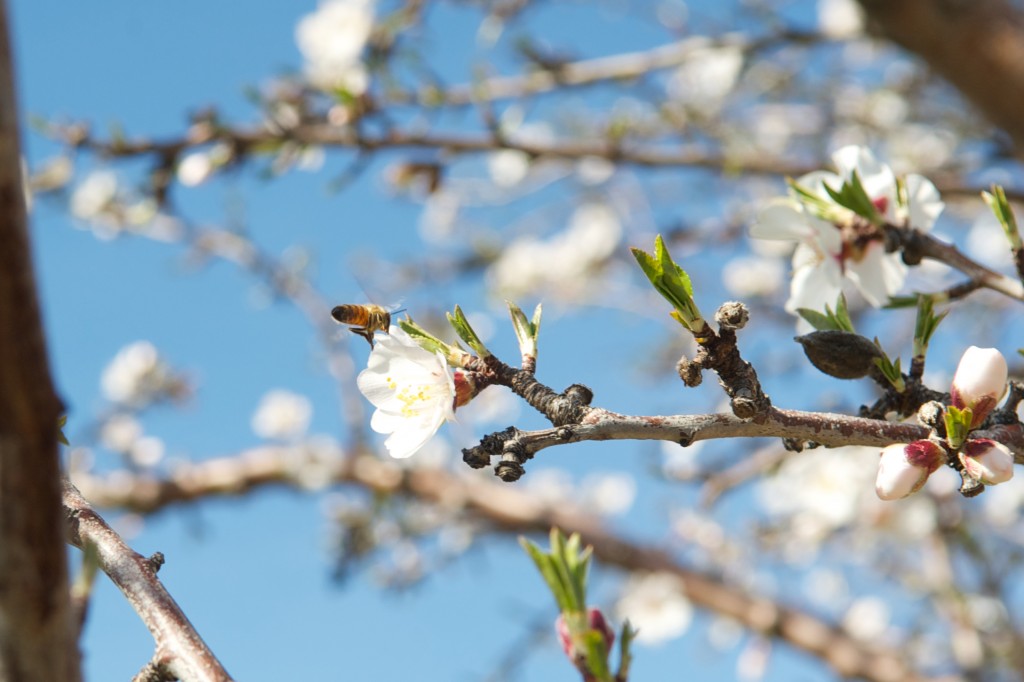 Clear, bright skies covered the Sacramento Valley on Monday, providing good support of the bees’ daily work and for the developing bloom. Morning low temperatures were widely reported in the mid and upper 30’s, while daytime highs reached into the mid 60’s. The mild conditions and warming temperatures provided strong impetus for the bees to leave their hives and observers reported 7 to 8 hours of excellent activity for the day.

The bloom in the Sacramento Valley continues to develop ahead of that in the San Joaquin and with the emergence of the first measurable bloom of the Padre, all varieties within the northern region now have some degree of their flowers available for pollination. Observers are reporting that the bloom from Colusa County south is the most advanced in the region with a significant proportion of the flowers in the Sonora, Nonpareil and California types open and available for pollination. However, observers are also reporting that while the overlap between varieties within any given orchard is quite good, there is a fairly wide range of development between orchards within any geographic area of the region as well.

On the whole, the bloom of the Sonora and Peerless has made great strides over the past 24 hours, with smaller increases noted in the amount of open bloom within the Monterey and Butte varieties. Observers are reporting that within the California varieties, the Aldrich is making a very good showing this year, with the trees presenting a very strong bloom.

Many growers are saying that they will delay preventative fungicide treatments for the time being, given the currently dry conditions. The lack of morning dew has aided to reduce the potential for infection in many areas of the region.

Calm winds and bright, clear skies graced the central region on Monday, providing good support for the developing bloom. Morning low temperatures were reported in the low to mid 30’s throughout the region while daytime highs reached into the mid 60’s. The mild conditions provided strong support for the bees’ efforts and observers reported 7 to 8 hours of excellent activity on the developing bloom.

The bloom in the central region is progressing well under the influence of the slight increase in temperatures. Observers are reporting that orchards along the I-5 corridor on the west side of the valley are the most advanced in the region, with Sonora, Nonpareil and California type varieties presenting the greatest amount of bloom available in the region. The balance of the region presents more of a mixed bag of maturity. Within any variety, plantings may be found along the Highway 99 corridor and within the eastern foothills that are fairly well advanced. However, as in the third of today’s photos, showing the Nonpareil and Aldrich, some plantings may be particularly delayed when compared with other orchards within the area.

Growers are monitoring their orchards closely in order to properly time applications of preventative fungicides. Last week’s rain event occurred before most plantings reached disease susceptible stages of development. Disease susceptibility has increased with the bloom’s progression and while rain is not currently in the forecast, morning dew can also provide enough moisture to initiate infections. Accordingly, a few sprayers could be seen running through the orchards as growers of the most disease prone varieties made their first preventative treatment. Other cultural practices were also being completed, including irrigation, brush shredding in young, more recently pruned orchards and fertilizer applications.

Clear, bright skies covered the southern San Joaquin Valley on Monday, providing growers with calm conditions throughout the day. Morning low temperatures were reported in the low to mid 30’s. Temperatures increased nicely as the morning progressed, reaching their highest point in the mid 60’s by mid-afternoon. The calm conditions and seasonal maximum temperatures provided good support for the bees, which put in from 6 to 9 hours of excellent activity on the developing bloom.

The ever-so-slight increase in temperatures has provided good support for the developing bloom. Observers are reporting that there are wide variations in the stage of development between single varieties within any geographic area of the southern San Joaquin Valley. As is normally the case, orchards along the west side are generally running ahead of those in the balance of the region. However, there are orchards along the west side that are exhibiting a delayed development and are running neck and neck with plantings along the east side foothills and along the Highway 99 corridor.  Some observers are reporting that advanced Sonora plantings are at or near their peak bloom, while others are reporting as little as 25% of the flowers on this early blooming variety are open and available for pollination.

Growers have begun applications of foliar nutrient sprays in advanced orchards. Some are adding preventative fungicides to the mix in order to have a degree of protection against fungi that can infect the bloom as a result of moisture supplied by the morning dew. Last week’s rain did not cause significant problems, owing to the rapid nature of the storm, the cold temperatures and the quick drying after the storm’s passage.