One of the favorite items in my office is a painting given to me by my former employees at The Schwan Food Company.  They signed their names on the back of this painting and on the front is a picture of a tree with the caption “Sometimes leadership means planting a tree under whose shade you may never sit.”  (Adaptation of Greek proverb)

This past year, the almond industry benefitted from the market leadership of Blue Diamond.  Before the season there was a widely held belief that growing almond demand from Asia was the source of stability and future for the industry.  With the 2012 crop, this was clearly not the case as China declined by 13% and Asia demand declined by 4% overall.  Currency fluctuations, higher pricing, name changes and political instability all had a role in this changing almond demand.

Blue Diamond’s investments in value-added new products and advertising stabilized demand at a time when prices rapidly increased by over $1 dollar a pound during the season.   The clearest evidence for the positive industry influence is that those markets where Blue Diamond increased its advertising investment grew while neighboring countries without the benefit of Blue Diamond advertising declined.  The story was the same across four different continents.  Overall, Blue Diamond value-added sales volume grew by 14% with a crop that declined by 7%. 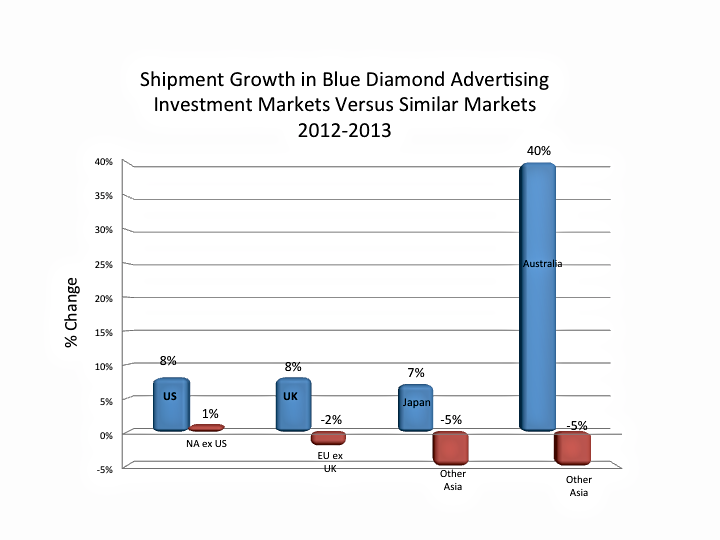 In a smaller crop, the math will indicate that some markets must decline.  The smaller supply is balanced by higher pricing.  What we should notice is which markets are willing to pay for higher priced almonds.  These are the markets that every almond grower, regardless of handler, should want to grow.

High tide in the almond market raises all ships.  This is not a case where some growers win at the expense of others.  This past year is a clear example of record industry revenues created by strong industry demand for value-added products in developed markets.  As an industry, we need to take this learning and refine our Almond Board of California marketing investments.  Our ABC market investment priorities were developed at a time when almonds were nearly half the price of what they are today.  We now need to increase marketing investment in countries that are willing to pay today’s prices for our almonds.

Getting the entire almond industry to plant more seeds in the right markets will increase effectiveness and is good of the entire industry.  It is the right thing to do and all almond growers will benefit as a result.