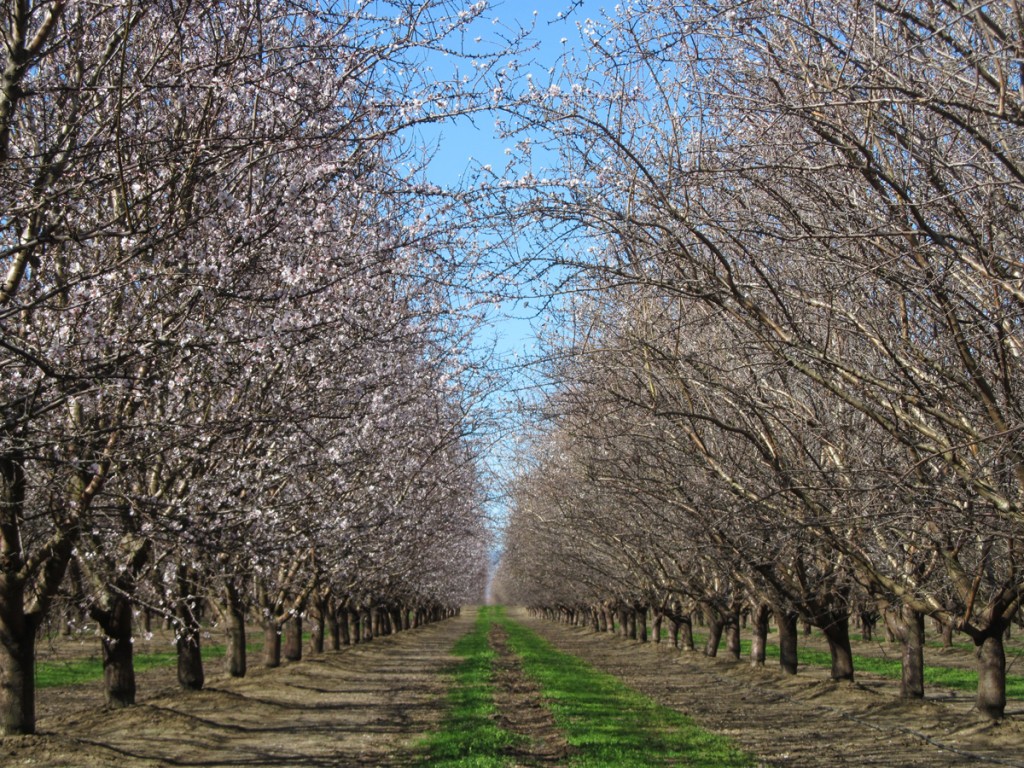 Clear skies, with only a few high wispy clouds covered much of the region all day on Thursday.  Temperatures ranged from the lower 30’s to the mid 60’s. Observers are reporting that the cold air mass that descended over the state in the wake of this week’s storm continues to influence the pace of bud development, creating a slow, but steady evolution towards bloom.

The Sacramento Valley almond orchards as a whole are now presenting the greatest amount of open bloom for pollination, with all but the late blooming Butte and Padre now displaying a measurable amount of open bloom. Of the major varieties, the greatest amount of bloom is found in the Winters, Sonora and Peerless. However, California types such as the Aldrich, Fritz and Price are now also moving into bloom with an average of 10% of their flowers now open and available for pollination.  Monterey, Nonpareil and Carmel follow the California types and are exhibiting good overlap, which greatly increases the opportunities for successful cross-pollination between these important varieties. Within any given variety, there is a definite variation in the stage of development between different geographic areas.

In the central region the Sonora has now officially entered its bloom period with 10% of its flowers now available for pollination. The California type varieties, such as the Fritz, Price and Aldrich are now beginning their evolution into bloom, white the Monterey and Carmel are moving strongly into the pink tip stage. Late blooming Butte and Padre follow the Carmel and are currently presenting the majority of their buds in the green tip stage.

In the southern part of the region many Nonpareil and California type plantings around the region have a significant proportion of their buds in the pink tip and popcorn stages, ready to move into bloom. Late blooming varieties, such as the Butte and Padre are now also beginning to show a change in color as their buds evolve into the pink tip stage.

Some growers, in areas recording the lowest temperatures, responded to the plunging thermometer by turning on their irrigation systems to warm the almond orchards and prevent damage to the developing flowers. Growers were also concerned about the low humidity levels produced by the drying winds the region has experienced this week and simply wanted to add some level of moisture to their orchards.  Very dry conditions are believed to reduce the pollen’s ability to germinate and fertilize the flower after pollination. Forecasters are calling for warmer daytime temperatures in the coming week, which should provide better conditions for the bee flight during the critical bloom period.