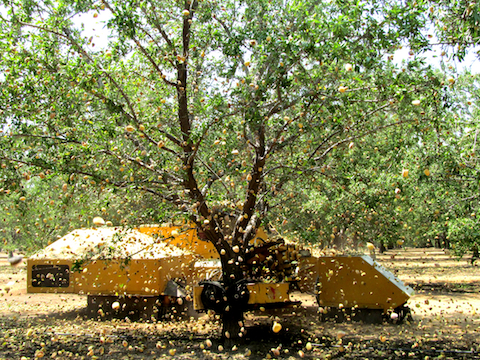 This report covers conditions and observations made between Monday, July 1 and Sunday August 4, 2013. The next report is scheduled for Monday, September 2, 2013. However, in the event of any significant occurrences prior to that date, this site will be updated as soon as possible.

Continuing the heat wave experienced in the last week of June, daily maximum temperatures reached to uncomfortable levels from 105 to 108 degree during the first days of July, increasing stress levels on the maturing crop, as well as on the valley’s residents. Fortunately, the very hot temperatures abated shortly after the 4th of July holiday, rising to more comfortable levels between the upper 80’s and upper 90’s for the balance of the period. Morning minimum temperatures followed a similar trend, dipping only into the low to mid 70’s as the period began and retreating back into the mid 50’s to mid 60’s for the majority of the period.  Monsoonal moisture that increased humidity levels in the central and southern regions also made its presence known in the Sacramento Valley. However, the moisture provided comparatively little impact on the region’s weather.

Growers attention during the period was focused on completion of the various tasks required prior to the start of the 2013 harvest. Irrigation was a prime activity during the period as growers worked to balance the desire to induce a slight degree of stress at the initiation of the hull split against the need to provide ample water required to counter stress imposed by the warmest days at the start of the period. Growers have been very protective of their limited water supplies this year, wanting to retain enough to provide the irrigations needed after the harvest.

Observers reported that the hull split began normally, if not earlier than in recent years, then seemingly came to an abrupt halt as daytime temperatures reached their highest levels imposing an excessive degree of stress on the trees. The normal progression of the hull split then resumed as temperatures receded to more normal levels. Observers are now reporting varying degrees of hull split on all varieties except for Mission, Padre and Fritz. Also noted is the apparently heavy shell and thick hulls observed in many of the region’s plantings. The heavy shell and commensurate good shell seal give growers hope of lower reject levels from both Navel Orange Worm, NOW, and ants. While treatments to control NOW “flights” that can impact early harvesting varieties have been completed, growers are now monitoring pheromone traps for timing of the next “flight” poised to start at mid-August. Growers hope to avoid additional treatments, but must monitor the insect’s life cycle in order to ensure good crop quality. Treatments with bait formulations targeted at offending ant species are also being completed. However, problems from web-spinning mites have been at a minimum this year, with few orchards having significant populations.

Grower sent shakers into the first orchards to be harvested during the final week of the period. However, shaking will not begin in earnest until the first full week of August. Observers have noted that shaking of the first orchards appeared to go quite well, with good nut removal and very few, if any nuts remaining in the trees. All are hoping that this pattern will continue throughout the harvest.

Throughout the region, growers are preparing their equipment and are poised to bring to harvest to a feverish pace as soon as their orchards are ready.

For a detailed copy of the report visit; http://www.bdingredients.com/blue-diamond-almonds-consolidated-california-almond-bloom-report-august-12-2013/