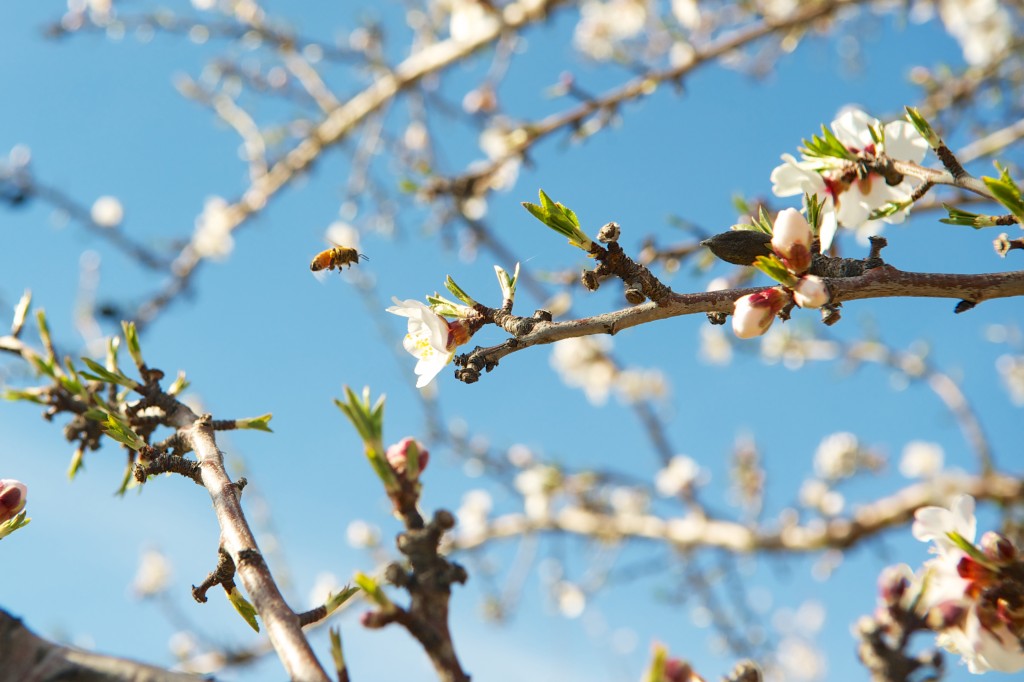 Northern California – February 25, 2013
Following a calm day on Friday when generally clear skies covered the region, weather during the final weekend of the month turned blustery when strong winds coursed through the region. Minimum temperatures were at their lowest levels on Friday morning when calm conditions allowed readings to dip into the low 30’s in the region’s coldest locations. Winds over the weekend buffered minimum temperatures for the remainder of the period with readings reported in the upper 30’s to lower 40’s on Saturday and Sunday morning. Daily maximums on Friday ranged from the upper 50’s to just over 60 degrees and dropped by a few degrees on Saturday, under the influence of the strong winds that reached speeds in excess of 25 mph.  Slightly lower wind speeds of 15 to 25 mph on Sunday allowed maximum temperatures to rise back into the mid 60’s on Sunday afternoon.

The bloom in the Sacramento Valley moved ahead steadily over the weekend, led by orchards along the west side of the region. Sonora, Winters and Peerless lead the early blooming cultivars and are followed closely by the California types and the Monterey. Advanced examples of the Nonpareil are now presenting a measurable proportion of their flowers for pollination and are closely matched with the Carmel this year. Advanced examples of the Butte are now presenting the first of their open flowers and lead the Padre, which is moving into the popcorn stage.

Observers are reporting that the bloom is free of fungal diseases at this point in time. Weather forecasters are calling for warming temperatures by the end of the week.

Central California – February 25, 2013
Following a relatively calm day on Friday, blustery winds dominated the weather during the final weekend of February. Morning low temperatures were reported at their lowest values on Friday morning when the calm conditions at sunrise allowed readings to drop into upper 20’s and lower 30’s. Readings rose to balmier levels on Saturday morning when early morning winds held temperatures in the upper 30’s to mid 40’s, then settled back into the mid and upper 30’s under calmer conditions on Sunday morning. Daily maximum temperatures exhibited a more uniform pattern, reaching into the upper 50’s to lower 60’s on each day during the period, with highest values reported on Friday afternoon.

As previously mentioned, winds were the dominant factor in the weather over the weekend. Winds were strongest on Saturday when speeds reached 20 to 25 mph in all areas of the region, then diminished slightly on Sunday when winds of 15 to 20 mph were recorded.

Observers reported that bee activity followed a pattern allowed by the winds with 6 hours of good activity reported on Friday, followed by 5 to 6 hours of poor activity on Saturday when the strong winds and partly cloudy skies reduced the bees’ desire to work the fields. Better activity was reported on Sunday under bright, clear skies. However, while the bees worked for up to 7 hours, their activity was described as poor to fair due to the impact of the winds.

The bloom in the central region moved ahead strongly over the weekend, most notably on the west side of the region along the I-5 corridor. Within the various varieties, the Sonora made the strongest surge, particularly along the west side where plantings there are approaching their peak bloom. In contrast, Sonora plantings along the east side foothills are displaying as little as 15% open bloom. In all areas of the region this year, the Sonora variety can easily mislead the casual, drive-by observer into believing that the percentage of open bloom is much lower than actual, owing to the weak bud sets contained in many Sonora plantings. California type varieties continue to lead the Nonpareil, while the Carmel is currently running neck and neck with the Monterey. The late blooming Butte and Padre are also moving ahead steadily and are now moving into the pink tip stage.

Southern California – February 25, 2013
Blustery winds blew through the Madera and Fresno County areas on Saturday and Sunday, reducing the bee activity in those areas, but leaving the balance of the region’s orchards relatively unaffected. Minimum temperatures were reported predominately in the mid to upper 30’s on Friday, with a few areas dropping into the lower 30’s. Readings increased by a few degrees on Saturday morning in all areas, then dipped back again on Sunday morning. Daily maximum temperatures reached into the upper 50’s and lower 60’s on each day during the period, with warmest temperatures reported on Friday and Sunday mornings and coolest values on Saturday, under the influence partly cloudy skies and fairly brisk winds. Winds played a dominant role in the weather over the weekend, when speeds in the teens were recorded in the Madera, Fresno and Kings County areas all day on Saturday and through Sunday morning. Calmer conditions were reported all day Friday and on Sunday afternoon.

The bloom in the southern region advanced steadily over the weekend, slowly breaking free of the influence of the cold temperatures experienced over the past week. Observers are reporting strong movement in the Sonora variety as the large proportion of buds in the popcorn stage at the end of the last week transitioned into bloom.  Observers are reporting relatively weak bud sets in the Sonora, which can easily give the casual observer a reduced impression of the actual amount of flowers available for pollination. As in the other regions of the state, the California type varieties are leading the Nonpareil as well as the Monterey, which advanced strongly over the weekend and is now moving into bloom. The Carmel is trailing the Nonpareil slightly, but observers are reporting that the potential overlap between the Nonpareil and Carmel remains quite good. The late blooming Butte is now moving into the popcorn stage, while the Padre continues its evolution into the pink tip stage.

Forecasters are calling for increasing temperatures over the coming week.