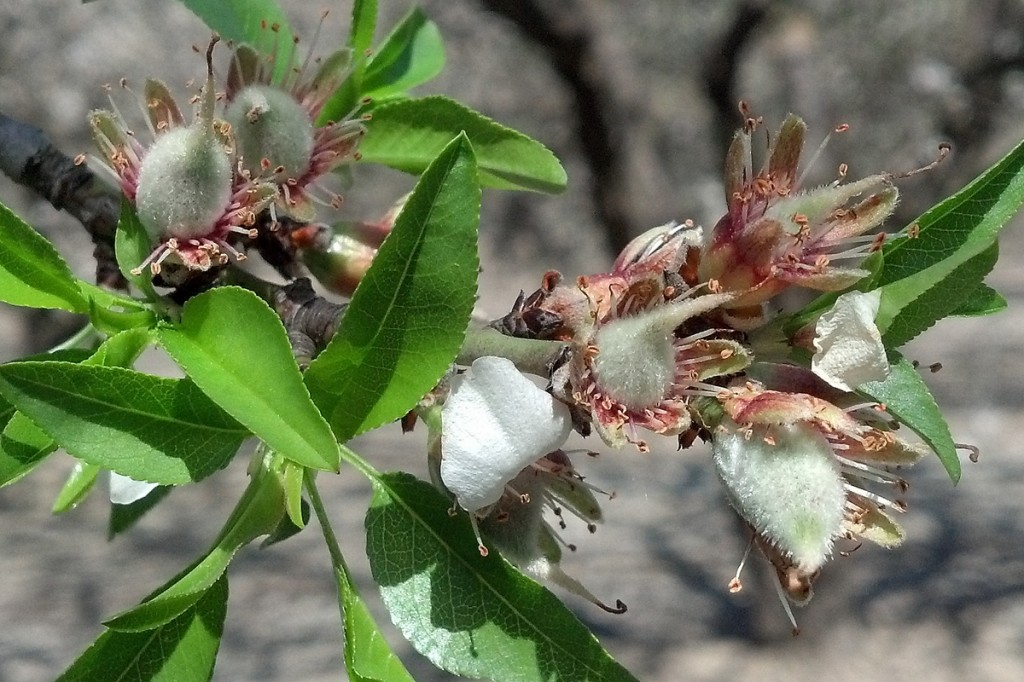 Generally clear skies with only few high wispy clouds dominated the Sacramento Valley’s weather on Wednesday, providing another day of good support for the developing crop. Morning lows were reported in the low to mid 40’s, while daytime highs reached to just over 80 degrees. Observers reported that the rapidly warming temperatures drove the bees from their hives, providing for a full 9 hours of activity. However, given the small amount of bloom remaining in the region, their efforts were directed largely at the flowering weeds in and around the orchards.

The almond bloom in the Sacramento Valley is now nearly complete, with the Padre remaining as the only major variety presenting over 10% viable bloom… and just barely so. The lack of significant winds this week has left many Butte and Padre plantings covered with petals, even though the vast majority of their flowers are no longer viable. Almond orchards around the region are becoming increasingly green as the newly emerged leaves grow in size. Within the cover of leaves, the rapidly growing nutlets, swelling within their jackets can be easily seen, leaving the trees with an overall “dirty” or “fuzzy” appearance when viewed from afar.

Beekeepers have returned to the region’s orchards to service hives and begin the process of moving their colonies to the next crop requiring pollination. Growers have been busy mowing weed growth within their orchards, irrigating and preparing for fungicide treatments and foliar nutrient applications.

Bright sunlight, shining from clear, blue skies bathed the central region all day Wednesday, providing strong support for the last days of the 2013 almond bloom. Morning lows remained at “warm” levels, dropping only into the low to mid 40’s. Maximum temperatures for the day were posted at their highest level yet this year, with warmest locations reaching just over the 80 degree mark. Bee flight operations reflected the very supportive conditions, with 9 hours of very good activity noted on the small amount of viable bloom available for pollination.

Above normal temperatures have pushed flower and nut development ahead strongly over the past few days, particularly over the past 24 hours. Butte and Padre remain as the only major varieties in the region still presenting some degree of viable bloom. Casual, drive-by observations indicate that these late blooming varieties still have the majority of their flowers in good condition and able to be pollinated. However, closer examination of the trees reveals that the Butte and Padre are holding their petals securely in the trees and that the vast majority of the flowers are no longer viable. This may be easily confirmed by a simple tap on the branch, resulting in a blizzard of petals floating to the orchard floor. Most certainly, had the region experienced any degree of winds over the past few days, we would have seen a stronger evolution into the jacket stage in many of the region’s orchards.

Beekeepers can be seen in the orchards servicing hives and preparing to remove them from the orchards. Many colonies will be moved into cherries and apples in the coming weeks.

High, wispy clouds provided accent to otherwise clear, bright skies over the southern region on Wednesday, helping to provide the warmest temperatures of the year, thus far. Minimum temperatures dropped only into the mid 40’s during the night, while daytime maximums reached into the low to mid 80’s. The rapidly rising temperatures provided ample encouragement for the bees to leave the hives and observers noted 9 hours of very good activity on the little viable bloom remaining to be pollinated.

With only the Padre presenting a noteworthy amount of viable bloom for pollination, the almond bloom in the southern San Joaquin Valley is now nearly complete. Observers are reporting that while a small amount of flowers can be seen on Nonpareil and several of the California type varieties, close examination of the flowers reveals that they are in fact no longer viable. As predicted in yesterday’s report, the Carmel has joined Monterey in the completion of its bloom, with both now displaying an insignificant number of viable flowers. Given the absence of flowers in many of the region’s orchards, the Padre will surely experience another day of intense attention from the bees as they search for pollen and nectar.

Beekeepers have begun removing hives from the orchards. As they do so, growers continue to irrigate their orchards to support the developing crop’s needs under the pressure of the above normal temperatures. Observers have noted that local irrigation districts have not yet begun deliveries, leaving growers to rely on their privately owned deep wells for water.