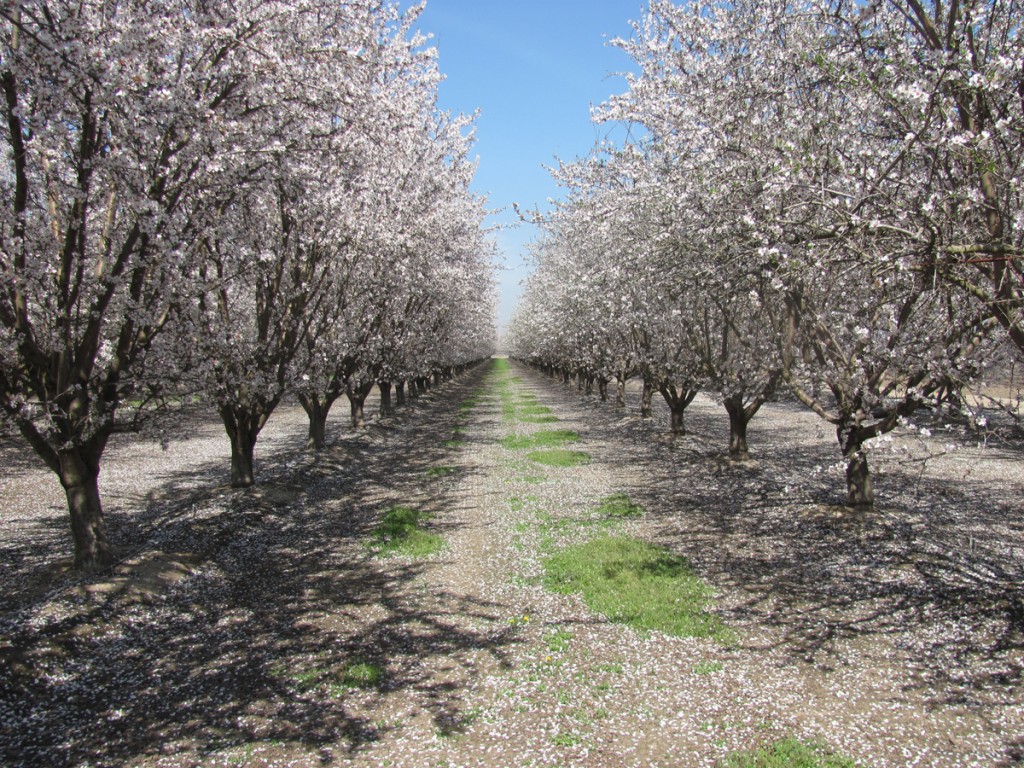 Weather in the northern region took an abrupt turn on Tuesday as the storm system approaching the state began to exert its influence. Overcast skies in the northern areas of the Sacramento Valley held morning temperatures in the mid 40’s, while clearer skies farther to the south allowed readings to drop into the mid 30’s. Clouds increased as the day progressed to cover the entire region, with afternoon high temperatures ranging from the mid 50’s to lower 60’s. Winds were also a major factor in the day’s weather. Observers reported sustained winds of 10 to 15 mph during the morning hours with speeds increasing as the day progressed. Gusts approaching 30 mph were reported throughout the region during the afternoon hours, greatly impacting the bee’s efforts to work.  As a result, observers reported only 3 hours of poor activity in the region’s northern areas, while the southern areas received 5 to 6 hours of poor activity, owing to the delayed arrival of the clouds and strong winds.

The scrubbing action of Tuesday’s winds has accelerated the degree of the petal fall and jacket stage in the Sacramento Valley, reducing the apparent amount of viable almond bloom remaining in the region. The bloom of the Sonora is now nearly complete, with the vast majority of the flowers of this early blooming variety in the petal fall and jacket stages and only a small amount of viable flowers remaining to be pollinated. Advanced almond orchards are taking on an increasingly green hue as the new leaves emerge and grow in size. Meanwhile, the floors of many orchards appear to be covered with snow as the spent petals accumulate in windblown drifts. With the exception of the Butte and Padre, all major varieties in the region have now moved beyond their peak bloom and were shedding petals aggressively in the wind. However, even though the Carmel’s bloom is now in decline, it is still well aligned with Butte and Padre, both of which are now at their peak condition.

Observers reported intense activity in the region on Tuesday as growers worked to finish desired chores before the storm’s arrival. Mowers and brush shredders could be seen scurrying through many almond orchards while other plantings were under irrigation. Even though the approaching storm is forecast to bring a significant amount of rain to the Sacramento Valley, it will not be enough to meet the tree’s moisture needs and irrigation is still required

Clear skies covered the central region for a second day on Tuesday, allowing the bright sun to light up the region’s blazing white almond bloom.  Calm conditions at sunrise allowed early morning temperatures to dip into the upper 30’s in the coldest locations, while daytime highs reached into the mid and upper 60’s. Light winds blew through the region during the afternoon hours, with speeds reaching into the mid teens. Observers reported that the bright sun spurred the bees to action early in the morning, providing for 8 hours of excellent activity in the orchards.

Many almond orchards in the central region are now at or near their peak bloom, providing for a very showy blanket of white orchards throughout the region.  Observers are noting that an increasing number of orchards are starting to shed petals from the trees. However, with the exception of the Sonora, which is well into the petal fall and jacket stages, all varieties in the region still have the vast majority of the flowers buds open and available to the bees. While the California type varieties are now just beyond their peak bloom, the Carmel has moved aggressively into bloom and is very closely matched with its associated Nonpareil. Butte and Padre are moving quickly towards their peak bloom, with many almond orchards along the west side of the region already at their peak condition.

Observers noted many sprayers moving through the region’s orchards as growers worked to complete disease control treatments prior to the arrival of the storm approaching from the Gulf of Alaska. Brush shredders could also be seen cleaning up brush in younger orchards that were pruned in the past few weeks.

Clear skies and bright sun typified the weather in the southern San Joaquin Valley on Tuesday, providing another day of opportunities for pollination of the 2013 crop. Observers reported that morning low temperatures dipped into the lower 40’s while daytime highs climbed into the low to mid 70’s. While the morning hours were calm, winds freshened at mid-day, with wind speeds in the mid-teens reported across the region. Bee flight operations were not impacted by the winds and observers noted 8 to 9 hours of excellent activity as the bees searched for flowers to forage.

Good weather conditions continue to support the southern region’s almond bloom.  The Nonpareil has now moved past its peak bloom, joining the Sonora and California types in their contribution to the shower of petals falling from the trees. Across the region, the Carmel, Monterey and the Butte are now at their peak bloom, with the Padre making an aggressive move towards its peak bloom as well.

Throughout the region, observers noted a snow-like shower of petals coming from almond orchards that have already reached their peak. The degree of petal fall was increased a bit by the freshening winds and the blast of air coming from the army of sprayers employed by producers as they worked to complete disease control treatments prior to the arrival of the storm system approaching the state. Particularly advanced plantings have shed a large proportion of their petals and are moving aggressively into the jacket stage. Observers have reported that nutlets can be seen growing within the protective jackets in the early blooming Sonora.