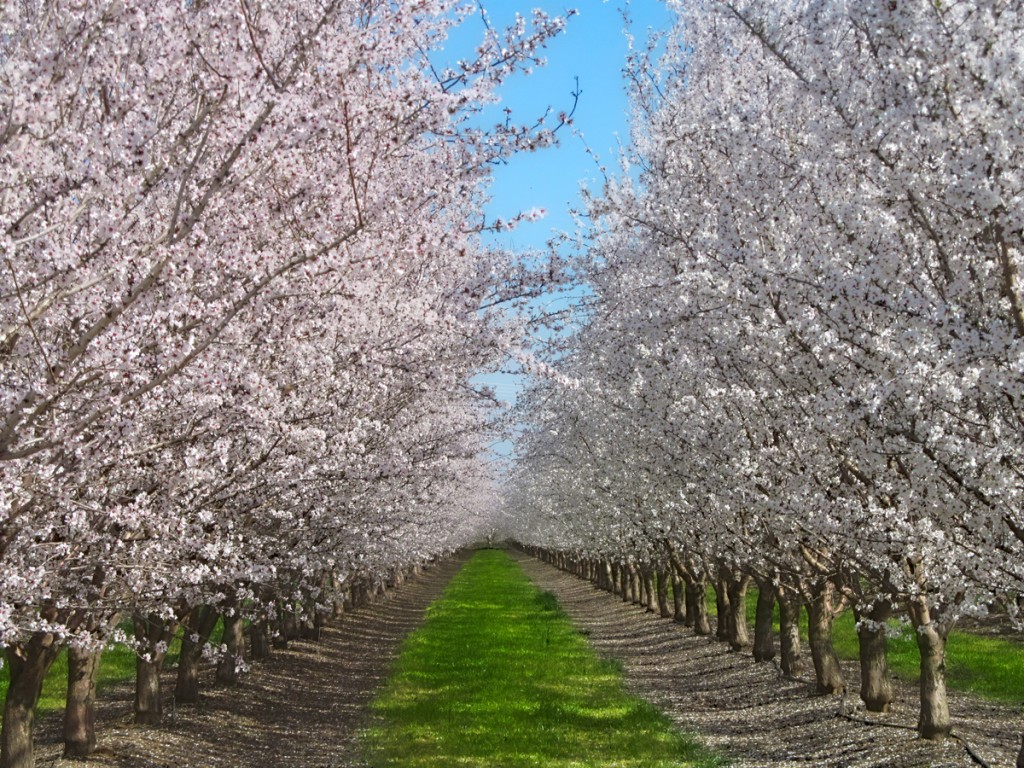 Weather conditions in the northern region provided for one more day of good opportunities for pollination before the arrival of a Pacific weather system forecast to pass over the state. Morning low temperatures were widely reported in the lower 40’s while daytime highs reached into the mid and upper 60’s. Observers reported that breezy conditions during the afternoon hours helped to scrub some petals from the almond trees and accelerate the degree of petal fall in many plantings. However, the light winds failed to significantly affect the bee’s efforts during the day and observers reported 8 hours of excellent activity in the almond orchards with a steady hum evident all day long.

The almond bloom in the northern region continues to run ahead of that in the San Joaquin Valley with all varieties now having some degree of their flowers in the petal fall stage. Sonora leads the region’s varieties, having the greatest amount of any variety in the jacket stage and smallest proportion of bloom remaining available for pollination. Peerless, which is marketed primarily as an in-shell almond follows the Sonora and leads the various California type varieties, which have just over a majority of their flowers open and viable as this time. Advanced examples of the Nonpareil almond trees are now moving into the petal fall and jacket stages with the viable proportion of their bloom declining steadily. Finally, late blooming Butte and Padre are now at or near their peak bloom and have begun shedding spent petals from the first of their flowers to open.

Observers noted that sprayers could be seen throughout the region applying preventative fungicides in advance of the approaching storm system.

Monday provided a break from the overcast skies that dominated the previous day, with bright, but hazy sunshine bathing the almond orchards all day long. Morning low temperatures were reported predominantly in the low 40’s, with coldest locations dropping to just below 40 degrees, while daytime highs reached into the mid and upper 60’s. Calm conditions accompanied the bright sun and mild temperatures, providing good support for the bee’s efforts. Observers reported an audible hum of commotion in the almond orchards as the bees put in a full 8 to 9 hours of excellent activity.

The continuing warm temperatures provided another day of strong bud development in the central region, pushing many almond orchards throughout the northern San Joaquin Valley towards their peak bloom. The Nonpareil and the California type varieties have now moved just beyond their peak and have begun their evolution into the petal fall stage. The Monterey is approaching its peak bloom and is followed closely by the Carmel. The greatest degree of variation and what may have been the most impressive amount of color visible on Monday was found in the late blooming Butte and Padre almond tree varieties. Many Butte and Padre almond orchards are fairly well synchronized this year, with advanced plantings almost ablaze with white flowers. However, other plantings may have as much as 40 points of difference between the two varieties, with the Butte leading the Padre. All should end well for these plantings, however, as the most delayed Padre also have a large proportion of buds moving into the popcorn stage, set to move into an aggressive bloom.

Almond growers report that advanced plantings around the region are now taking on a green tinge as their leaves emerge and grow in size. This is most evident in California type varieties such as the Price and in some Sonora plantings. Some growers have expressed a degree of concern about the amount of green becoming visible, believing that those orchards “greening up” at a faster rate are doing so because of a poor crop potential.

Sprayers could be heard throughout the region applying preventative fungicides in advance of the rain forecast to arrive at mid-week. Irrigation continues to be a major activity. At least one local irrigation district, the Modesto Irrigation District has begun filling its canal system for grower deliveries. This will allow growers without private wells that depend on “surface water” to begin irrigating their orchards.

Skies over the southern San Joaquin Valley were clear and sunny on Monday, supplying excellent conditions for bee flight and pollination of the almond crop. Morning low temperatures were reported in the mid 40’s while daytime highs reached to as high as 70 degrees. Observers reported that the quickly rising morning temperatures and absence of wind inspired the bees to leave their hives early in the morning, allowing them to put in a solid 9 hours of excellent bee activity.

Warm temperatures continue to influence the pace of bud development in the southern San Joaquin Valley. With the exception of the early blooming Sonora, which has already reached its peak bloom and is well into the petal fall and jacket stage, many almond orchards around the region are at or near their peak bloom. Observers reported that breezy conditions overnight helped to scrub petals from the trees in more advanced plantings, increasing the degree of petal fall in Nonpareil and many California type orchards. Meanwhile, Carmel, Monterey and Butte plantings around the region are growing well and approaching their peak bloom. While the Padre is trailing the Butte, there is an ample amount of bloom available for pollination to adequately cover the Butte.

Observers reported that sprayers could be seen in all areas of the region applying preventative fungicides in advance of the storm system approaching the state. Most almond growers are also including foliar nutrients in the treatment in an effort to support the developing crop. For those who have completed their treatments, irrigation is a regular chore, even at this early date.