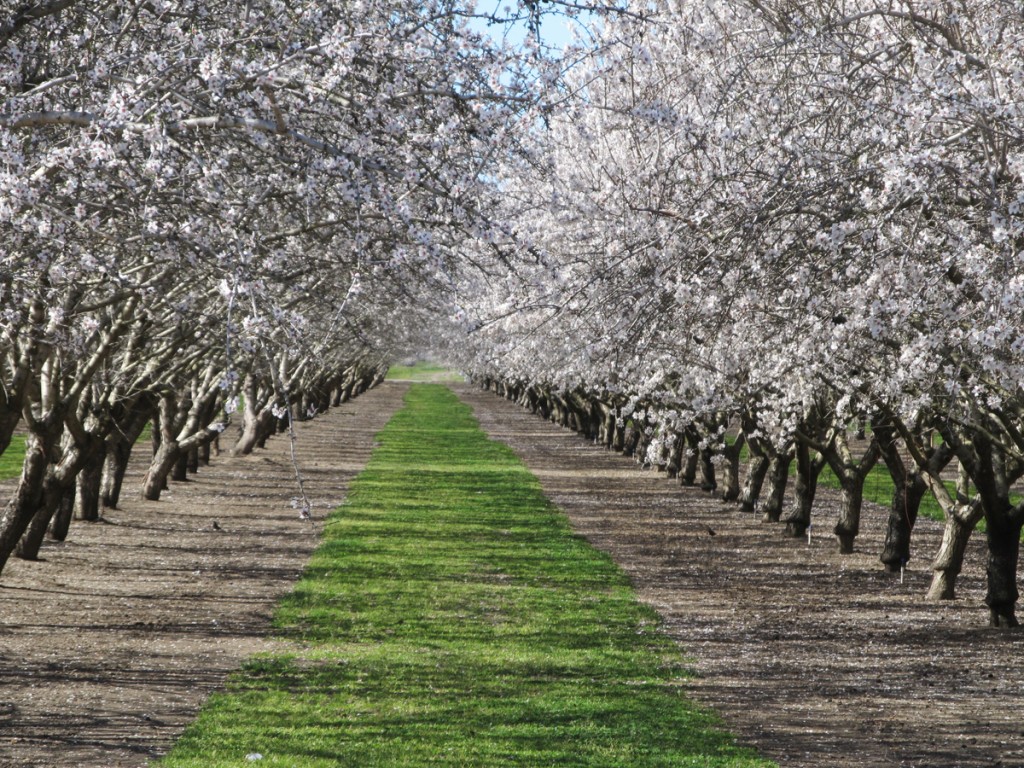 Observers reported that the best bee flight of period was noted on Friday when 8 to 9 hours of excellent activity was observed. Saturday’s increasing clouds did not cause serious difficulties for the bees, allowing 5 to 7 hours of good activity, while heavier clouds and a few scattered showers on Sunday reduced the bee’s efforts to 5 to 6 hours of fair activity.

The relatively warm nighttime temperatures over the weekend have provided for a strong surge in almond bud development and a rapid increase in the pace of the bloom. Having reached its peak bloom at the middle of last week, the Sonora is now moving strongly into the petal and jacket stages. The California type varieties, as a group, reached their peak condition over the weekend and lead the Nonpareil, which is at or near its peak bloom. While the Monterey has begun to shed petals, this variety, which is slightly ahead of the Carmel, is still approaching its peak bloom. The late blooming Butte and Padre are now well into their bloom phase and can be expected to make good progress over the next few days, given the large percentage of their buds now in the popcorn stage, poised to move into bloom.

Generally clear skies on Friday gave way to increasing clouds over the weekend, with overcast to mostly cloudy skies covering the northern San Joaquin Valley all day on Sunday. Morning low temperatures were reported at their coolest levels under clear skies on Friday; with readings ranging from the upper 30’s to lower 40’s. Minimum’s on Saturday and Sunday reflected the increasing cloud cover, with readings on Saturday reported predominantly in the low to mid 40’s and upper 40’s to lower 50’s on Sunday. Daily maximum temperatures grew generally warmer as the weekend progressed with readings increasing from the upper 60’s to lower 70’s on Friday to the low to mid 70’s under Sunday’s cloudy skies.

Reports from the almond orchards have noted a strong surge in bud development over the weekend, no doubt pushed ahead by the relatively warm temperatures. While petals of the Sonora continue to cling to the flowers, leaving plantings of this early blooming variety still bright with color, their withered appearance reveals the fact that the flowers are no longer viable and that the Sonora has moved past its peak bloom. Advanced examples of the Aldrich, Fritz and Monterey almond tree varieties, which are found mainly along the west side of the region, have also reached their peak bloom. Other plantings of these varieties along the Highway 99 corridor and in the eastern foothills are approaching their peak bloom and can be expected to peak within the next day or two. Strong movement has also been reported in the Carmel, Butte and Padre almond tree varieties. While the Carmel is still short of its peak bloom and in excellent condition, observers have noted that almond trees exhibiting symptoms of Non-Infectious Bud Failure or “Crazy Top” have particularly weak bud sets this year and are nearly devoid of bloom. Butte and Padre are displaying particularly wide variation in the amount of open bloom, with delayed examples of both presenting only a few percentage points of open bloom and others, within the same geographic area presenting in excess of 80%.

Bright, clear skies on Friday gave way to increasing cloud cover as the weekend progressed, with overcast skies covering the northern half of the region on Sunday and mostly cloudy skies over Kern County. Observers noted morning low temperatures on both Friday and Saturday morning in the lower 40’s with minimums on Sunday rising into the low to mid 50’s under the insulating effect of the early morning blanket of clouds. Daily maximum temperatures increased from Friday’s reported levels in the low to mid 70’s, reaching into the upper 70’s to lower 80’s on Saturday. Maximum temperatures then fell back into the mid 60’s to lower 70’s on Sunday afternoon.

Relatively warm nighttime temperatures over the past few days (certainly the warmest seen since last fall) have help to push the almond bloom ahead strongly in the southern region.  Led by the Sonora almond tree variety, which peaked at mid-week, the California type varieties are now at or near their peak bloom and moving into petal fall. Nonpareil is also very near to its peak condition with advanced plantings also starting to shed a few petals to the ground. The Monterey leads the Carmel, with both having the majority of their flowers now open and available for pollination. The southern region’s Butte plantings are now running neck and neck with the Carmel and are followed closely by the Padre, which is moving strongly from the popcorn stage into bloom. Observes are reporting a wide variation in the amount of open bloom visible in the Padre and in some Butte plantings, with the extreme values running from 30% to 80% open bloom.