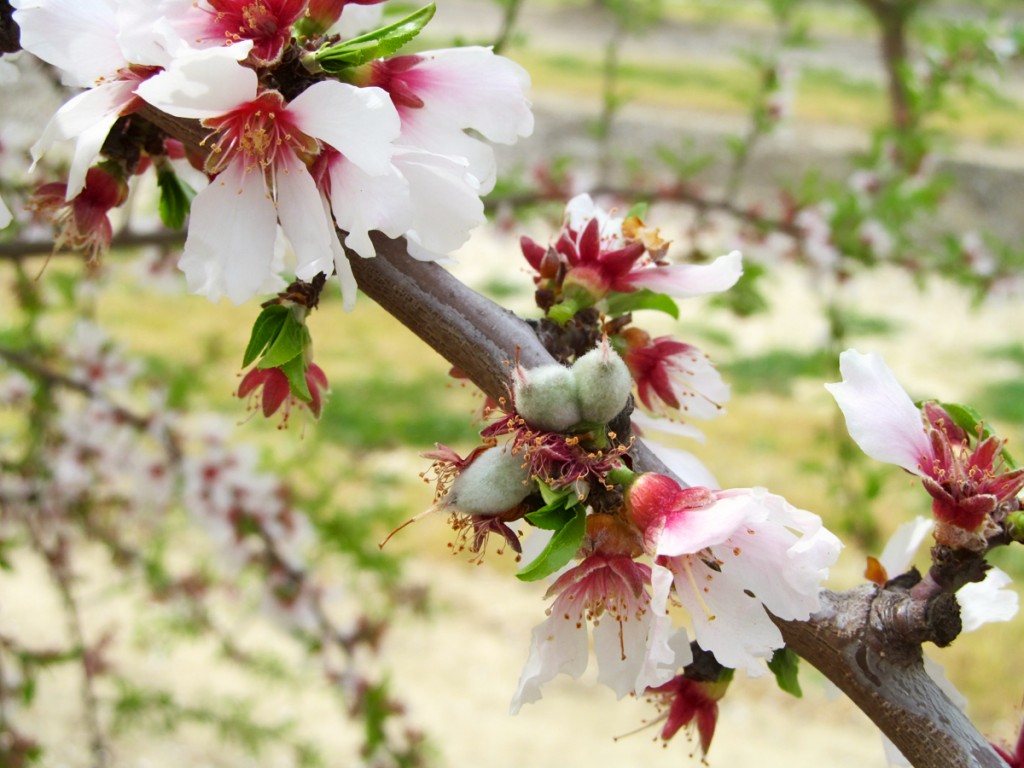 This is the final daily report of the 2013 bloom season. The next scheduled report will be posted on Monday, March 25, 2013. In the event of any significant occurrences prior to that date, this site will be updated as soon as possible.

Clouds covered much of the Sacramento Valley on Thursday morning as the trailing edge of a weakening weather system passing north of the state moved through the region. Morning lows were reported in the mid 40’s to lower 50’s while daytime highs reached into the mid 70’s, buffered slightly by the mid-day clouds. Observers reported that the bees took advantage of the warm temperatures, putting in 8 hours of very good activity, focused on the flowering weeds in and around the almond orchards.

The almond bloom in the Sacramento Valley has been completed. Observers are reporting that nutlets are developing well, taking full advantage beneficial weather the region has experienced and that the orchards have taken on the characteristic “dirty” or “fuzzy” post-bloom appearance imparted by the mass of jackets covering the trees. Almond trees continue to cast spent petals to the orchard floor while the growing nutlets increase in size and push free from their protective jackets. Nutlets are now beginning the differentiation process wherein those that will be retained to harvest flourish and grow larger, while other, smaller nutlets are sequestered and shed from the tree. This natural process is highly dependent on post-bloom weather, which affects the amount of nutrients that trees can produce to support the developing crop. Obviously, bright sunshine and warm temperatures will be preferred over the weeks ahead.

During the next week, growers will be monitoring their orchards closely. Irrigation will be normal task that will continue throughout the growing season. The threat of rain at the middle of next week has inspired growers to re-evaluate the degree of disease protection they may need. Treatments will be made as required by the conditions. And while growers go about the tasks needed to support their crop, beekeepers will be removing hives from the orchards, moving on to the next crop requiring pollination.

Almond growers woke to clear skies on Thursday morning and the promise of another warm day in the northern San Joaquin Valley. Skies quickly grew cloudy, however, as the trailing edge of a storm system passing north of the state approached from the west, producing a high, broken overcast by noon, and then gradually exited to the east by the end of the day. Morning low temperatures were widely reported in the mid 40’s while warmest locations under the clouds were reported in the lower 50’s. Daytime highs were reported a few degrees below the previous day’s values, held in the mid 70’s by the mid-day clouds and the 5 to 15 mph winds that propelled them across the region. While the winds provided the bees with a small challenge as they searched for flowers, they were nevertheless were able to put in 9 hours of excellent activity on the rapidly declining almond bloom.

With the exception of the late blooming Butte and Padre, the almond bloom in the central region has been completed. While younger, more vigorous plantings still have a fair amount of viable bloom, the vast majority of Butte and Padre plantings has already completed their bloom and have few viable flowers remaining. Casual observation of many of these plantings would indicate that a significant amount of bloom remains to be pollinated. However, closer examination reveals that these orchards are simply retaining their petals and few viable flowers are left to pollinate. This was confirmed on Thursday, by the fact that as winds blew through the orchards, petals were being shed from the tops of the trees where the winds had greater effect, while the lower areas of the trees where the winds could not reach still held a large proportion of spent petals. Given the warm temperatures experienced this week, the bloom of the most delayed plantings will be completed over the weekend.

Within the balance of the region’s varieties, Sonora, Nonpareil and the California type varieties are all shedding the last of their petals. Nutlets in advanced examples are also growing daily and breaking free of their protective jackets. Observers have noted that the growing nutlets are also beginning to differentiate in size, a natural process wherein the largest sizes are retained to maturity and much of the smallest size is sequestered and dropped from the tree.

Over the coming week, growers will be monitoring their orchards closely for signs of fungal diseases and will provide protection as required. Irrigation will be a regular activity, as well.

While clear skies reigned over the Kern County throughout the day on Thursday, cloudy skies covered much of Madera and Fresno Counties as a mass of clouds passed over the region. Morning low temperatures dropped only into the upper 40’s and lower 50’s, while daytime highs reached unseasonably warm levels, rising into the low to mid 80’s. Observers reported that the transient clouds failed to deter the bees from the daily duties, allowing for a full 9 hours of very good activity on the insignificant amount of bloom.

The almond bloom in the southern San Joaquin Valley has been completed. While some vigorous Butte and Padre plantings still have a small amount of bloom available for pollination, even these delayed orchards will complete their bloom over the coming weekend, given the temperatures the region is currently experiencing. Preceded by the early blooming Sonora, nutlets of the Nonpareil and California type varieties are now breaking through their protective jackets and growing in size. This process will continue over the next few weeks as the nutlets differentiate in size, with the largest retained and the smallest cast to the orchard floor.

Aside from the natural “dirty“ appearance imparted by the mass of jackets covering the trees, almond orchards around the region are becoming increasingly green as their newly emerged leaves grow in size.  This leaf cover is required to provide the nutrients needed by the developing crop. Growers will support the growing nutlets by properly fertilizing their orchards, using materials applied through the soil, irrigation water and directly to the leaves themselves. All of this will be accomplished while growers control weed growth, irrigate and beekeepers remove their hives from the orchards.