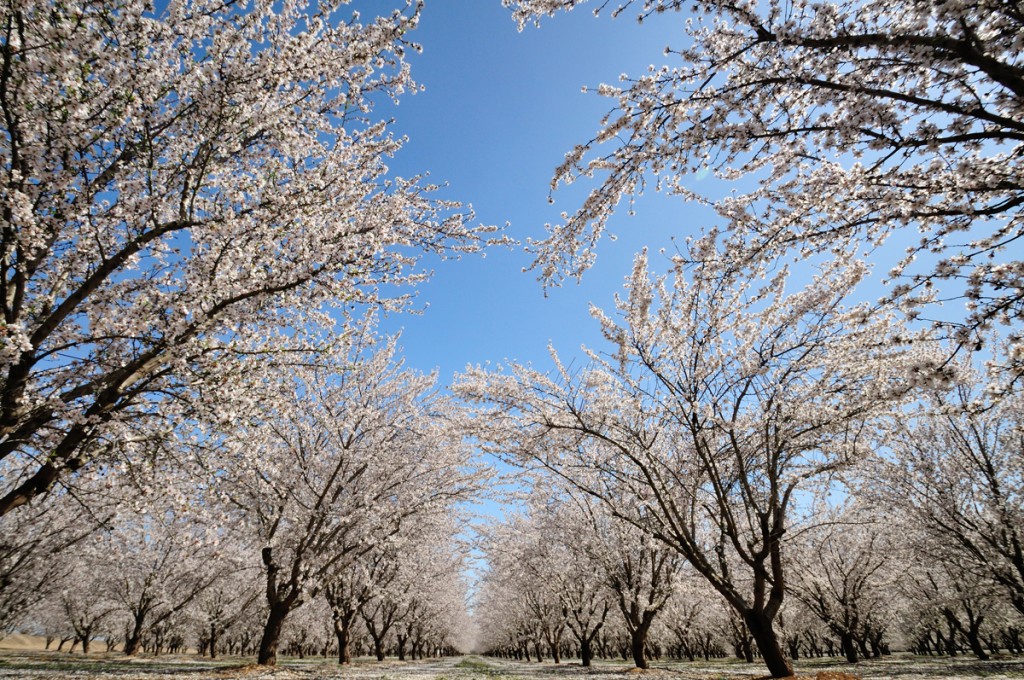 Clear skies reigned over the Sacramento Valley on Monday, providing good conditions for the bee’s efforts to pollinate the balance of the almond orchards. Morning low temperatures were widely reported in the upper 30’s to lower 40’s, while daytime highs reached into the low to mid 70’s.  Light breezes combined with the bright sun to drive the bees into the orchards, allowing for 7 to 8 hours of very good activity, focused primarily on the Butte and Padre varieties.

Orchards in the Sacramento Valley are becoming increasingly green with a coating of newly emerged leaves.  Meanwhile, the bloom of the California type varieties has been essentially completed, with the average percentage of viable bloom now dropping below 10%. The Monterey and Nonpareil varieties are trailing closely behind the California types and will complete their bloom in short order. Aside from the Carmel, which on average still has a significant amount of bloom available for pollination, the greatest amount of viable bloom is found on the Butte and Padre. Observers reported intense bee activity on these varieties as the insects searched for flowers to forage upon. Observers also noted that petals could be seen floating down from the trees in all varieties as they evolve into the petal fall and jacket stages.

While growers are certainly enjoying this week’s warmer temperatures, forecasters have brought up the possibility of rainfall and colder conditions at the middle of next week. Observers are reporting that growers are reviewing their disease prevention programs and considering preventative treatments to protect the developing nutlets and the newly emerged leaves from infection.

Clear skies with a just few high wispy clouds dominated the view over the central region on Monday, with light breezes and mild temperatures providing for a very comfortable day in the orchards. Morning lows were reported in the mid and upper 30’s while daytime highs reached into the upper 60’s and lower 70’s.  The mild conditions encouraged the bees to leave their hives fairly early in the day, putting in 8 to 9 hours of excellent activity in those orchards with viable bloom remaining.

Warming temperatures and calm conditions on Monday provided good support for the developing crop. While the number of flowers continues to decline in all varieties, the greatest proportion of viable bloom remaining available for pollination is found on the Butte and Padre. Observers are reporting that these varieties are also presenting the greatest degree of variation visible in the region, with advanced plantings having as little as 20% viable bloom remaining while delayed plantings still have as much as 80% of their flowers available for pollination.

Among the Nonpareil, Carmel and California type varieties, the proportion of viable bloom is decreasing daily and many of these orchards are beginning to take on the characteristic “dirty” appearance imparted by the nutlets growing within their jackets. Almond orchards are also becoming increasingly green as the newly emerged leaves grow in size.

Observers noted that growers who have previously irrigated their orchards have returned the fields to mow excessive vegetation and complete other orchard tasks. While growers with low volume irrigation systems typically add fertilizer materials to the water while irrigating, negating the need for a pass through the field with a tractor drawn applicator, others could be seen applying fertilizer materials to support the developing crop. Sprayers could also be heard travelling through the orchards as growers apply foliar nutrient sprays.

Calm conditions prevailed in the southern San Joaquin Valley on Monday, providing good pollination opportunities for the almond orchards still having viable bloom available. Morning low temperatures were reported in the upper 30’s to lower 40’s, while afternoon highs reached into the upper 60’s and lower 70’s. Observers reported that the beneficial weather provided ample opportunities for the bees to work the orchards, putting in 7 to 8 hours of excellent activity, focused primarily on the Butte and Padre varieties.

The bloom in the southern region continues its steep decline, with petals of all varieties aggressively shedding petals.  The bloom of the Nonpareil and the California type varieties is now essentially complete, with the average amount of viable bloom remaining having dropped below 10%. Both types now have the majority of their petals in the jacket stage, joining with the early blooming Sonora.  While the Carmel, Butte and Padre are also declining rapidly, these varieties still present the greatest proportion of viable bloom for pollination and have drawn virtually all of the bee’s attention over the past few days.

With the evolution into the jacket stage, grower attention turns towards providing adequate support for the developing crop. Obviously, irrigation is a prime consideration, as is crop nutrition. Many growers add fertilizer materials to their water while irrigating and apply foliar nutrients, as well.  Disease prevention also warrants attention, as growers want to reduce the impacts of fungal diseases on the developing crop.