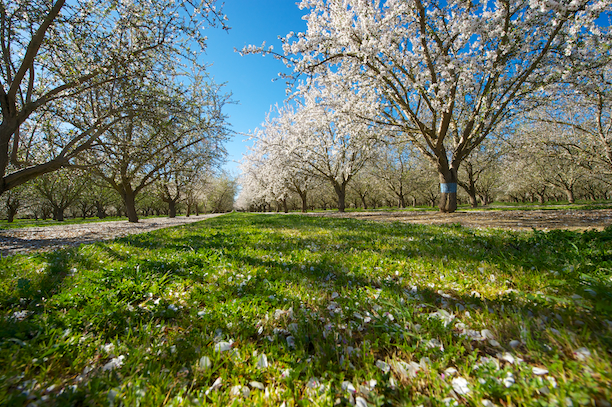 Growers in the Sacramento Valley enjoyed generally clear and occasionally breezy weather over the weekend as the weather system that threatened the region last week exited to the south. Partly cloudy skies cleared on Friday, leaving the region generally cloud free for the balance of the period. However, winds with speeds reaching into the teens reduced bee activity slightly on Friday and Saturday. Morning lows during the period were reported uniformly in the mid and upper 30’s while daytime highs increased from the mid 60’s on Friday, peaking in the mid and upper 70’s on Sunday afternoon.

Observers reported 6 to 7 hours of fair bee activity throughout the almond orchards on Friday. Those in the southern areas of the region reported 5 to 6 hours of fair activity on Saturday under the influence of moderate winds, while observers in the northern areas reported 7 to 8 hours of good activity under calmer conditions. Best conditions for bee flight were experienced on Sunday, with observers throughout the region reporting 7 to 8 hours of very good activity, focused primarily on the varieties presenting the greatest amount of viable bloom.

The Sacramento Valley’s bloom declined a bit more slowly than in the other growing regions over the weekend. The bloom of the Sonora has been completed and nutlets of this early blooming variety may be seen growing within their jackets. Nonpareil and the California types now have very little viable bloom remaining in the trees and lead the Monterey into the petal and jacket stages. Nutlets are now visible growing within the jackets on the Carmel and Monterey. This is also the case in the California types, as well. The greatest proportion of viable bloom is found on the Butte and Padre, which still retain a majority of their flowers in bloom.

Weather forecasters are calling for warm temperatures for the week, with readings in the 70’s.

Generally clear skies and warming temperatures typified the weather in the central region over the weekend. Morning temperatures were reported at their warmest level on Friday, the 8th when readings dropped only into the upper 30’s to lower 40’s. Temperatures were reported a few degrees cooler on Saturday and Sunday mornings, with readings ranging between the mid and upper 30’s. Daily maximum temperatures assumed an opposing trend with readings reaching into the upper 50’s and lower 60’s on Friday and mid to upper 60’s on Saturday and Sunday afternoon.

While daily temperatures were warm enough to support bee flight, breezy conditions on Friday when wind speeds reached into the mid teens, and to a lesser extent on Saturday slightly hindered the bee’s desire to work the almond orchards. Observers reported 4 to 5 hours of poor to fair activity on Friday in the region’s northern areas under fairly breezy conditions, while growers in the southern Stanislaus and Merced County areas enjoyed calmer air and 6 to 8 hours of fair activity. More uniform conditions on Saturday provided 5 to 6 hours of fair activity on Saturday, while calm conditions on Sunday provided for 8 to 9 hours of excellent activity in all areas of the region. Observers noted that bee activity was particularly aggressive in those plantings presenting the greatest amount of viable bloom.

The central region’s bloom took a dramatic step forward over the weekend, with the proportion of viable flowers remaining in many of the region’s orchards declining rapidly. The Sonora is now virtually devoid of petals. Nutlets can be easily found growing within the jackets, with the largest putting pressure on the jackets and about to break free. The bloom of the Nonpareil and its associated pollenizers moved strongly ahead over the weekend, with orchards along the west side having an insignificant proportion of their flowers still viable. Plantings along the Highway 99 corridor and along the eastside still have a fair amount of viable bloom. However, these orchards are also moving into the petal fall and jacket stages and will complete their bloom within the next few days. While Carmel and Monterey plantings are still quite white with bloom, many of the flowers are no longer viable and have moved into petal fall. Finally, Butte and Padre plantings are exhibiting the greatest degree of variation in the northern San Joaquin Valley. While advanced plantings of these late blooming types peaked late last week and have begun to aggressively shed their petals, other plantings were reaching their peak bloom on Sunday and are just beginning to shed the first of their petals. Observers reported that bee activity was very intense on the Butte and Padre plantings, with many orchards literally roaring from the number of bees flying through the trees. Activity was much quieter in Nonpareil and California type plantings presenting a commensurately lower proportion of viable flowers.

The southern region experienced a wide range of weather conditions over the weekend. Clouds covered the vast majority of the region on both Friday and Saturday as the eastern edge of a storm system that traveled along the coastline cast waves of moisture over southern state. Rain fell over the entire region on Friday night, continuing until noon in the Kern County area, which in combination with winds of 10 to 15 mph, greatly reducing bee activity in the region’s orchards. Rainfall totals ranged from 0.2 to 0.8 inch. Morning low temperatures were at their highest values on Friday and Saturday, with readings reported predominately in the lower 40’s. Minimum temperatures dropped to their chilliest levels on Sunday morning under clear skies, with readings widely reported in the mid and upper 30’s. Maximum temperature increased daily during the period, with readings rising from the lower 50’s on Friday, to the mid and upper 60’s on Sunday afternoon.

The inclement conditions experienced over the weekend have greatly reduced the apparent amount bloom available in the southern San Joaquin Valley, scrubbing spent petals from the trees and accelerating the evolution from bloom into petal fall, as well. The bloom of the Sonora has been completed. Sonora trees have shed all but the most persistent petals to the ground and nutlets can be easily observed growing within their jackets. Advanced examples are also beginning to display a small amount of nutlets that have broken free from the jacket. The California type varieties are leading the Nonpareil, with both types having lost a significant proportion of their petals and the majority of their flowers in the jacket stage. While the Carmel, Butte and Padre still have a significant proportion of their flowers available for pollination, the bloom of these varieties also declined steeply over the weekend.

Forecasters are calling for warmer temperatures for the week, with readings rising into the mid and upper 70’s.