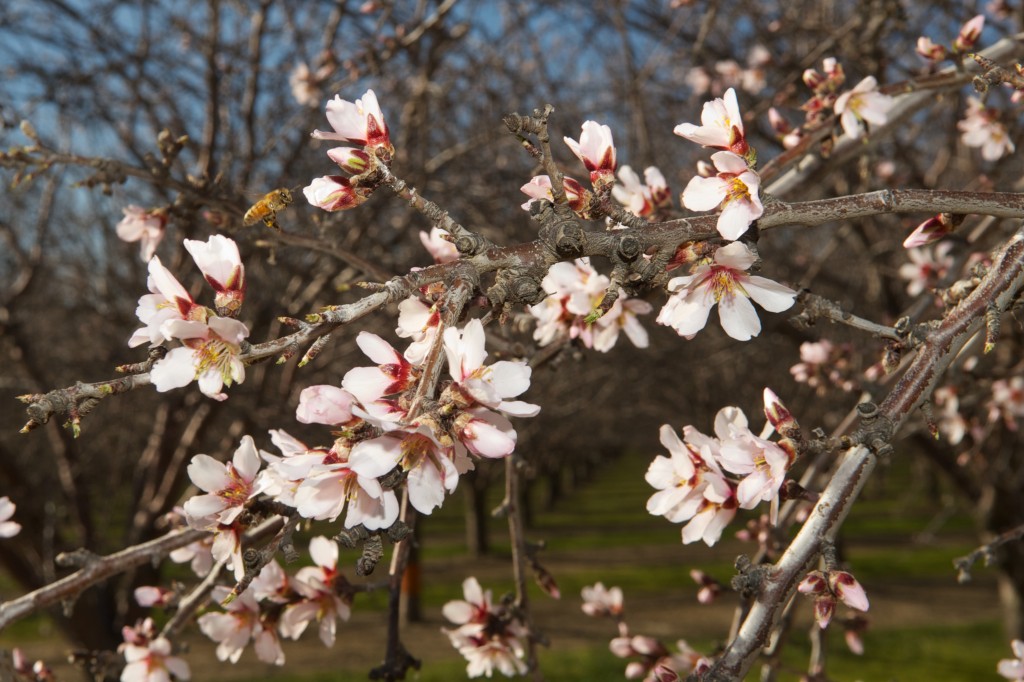 Clear skies combined with low humidity levels allowed morning temperatures to drop into the upper 20’s on Wednesday, inspiring growers in the Sacramento Valley to employ frost protection measures. Temperatures recovered nicely during the morning hours, quickly eliminating the risk of damage and providing adequate impetus for the bees to leave their hives. The rising temperatures peaked in the mid and upper 60’s by mid afternoon, allowing the bees to put in a total of 7 hours of very good to excellent activity on the newly opened bloom.

Growers in many areas of the region turned on their irrigation systems to provide protection against the potentially damaging early morning temperatures. Observers noted that irrigation systems were activated at approximately 3 a.m. and temperatures were held above damaging levels. Observers also reported that most growers did not send helicopters over the orchards due to the weak nature of the inversion layer on Wednesday morning. This layer of warmer air that normally lies above the orchards can be an effective tool for bringing temperatures within the orchard back to safe levels.

The bloom in the Sacramento Valley has benefitted greatly from the warming temperatures over the past few days and has made great strides through the various stages of development. The overall bloom of the Sonora continues to progress towards its peak condition, even as advanced plantings of this early blooming variety start to shed the first of their petals. Observers have noted that advanced Nonpareil plantings are now approaching their peak bloom along the west side of the valley, while younger, more vigorous plantings, such as those presented in the photos accompanying this report are just beginning to enter their critical bloom period. We are seeing excellent overlap between varieties this year, in spite of the fact that there is quite a bit of variation between different geographic areas. Now that the Padre has made its move from popcorn into bloom, all varieties in the region have a measurable proportion of their flowers available for pollination.

Forecasts of wet weather in the region next week have inspired some growers to begin applications of preventative fungicides to plantings in the most disease susceptible stages of development. Many have been withholding treatments as a result of the dry, low disease pressure conditions since the bloom began.

Mild temperatures and light breezes graced the central region Wednesday, providing sharp contrast to the apparent chill in the air imparted by the previous day’s blustery winds. Temperatures at sunrise dropped to the freezing point in much of the region, and a degree or two lower in the coldest locations. Temperatures rebounded quickly, however, driving the bees from their hives by mid-morning and providing strong support for their efforts in the orchards with maximum readings reaching into the mid and upper 60’s. While a few high clouds passed over the region at mid-day, observers noted that they were not a factor and that the orchards were literally humming with the bees’ activity, which continued unabated late into the afternoon. As a result the bees were able to put in a full 8 hours of excellent activity for the day.

Sonora leads the bloom in the central region with many orchards along the Highway 99 corridor now at their peak bloom. As noted in yesterday’s report, plantings along the west side are running ahead of the balance of the region and have already reached their peak condition. Fritz and Price have moved aggressively into bloom over the past few days are approaching their peak bloom in advanced plantings. Meanwhile, growers around the region have been commenting on the more deliberate pace of the Nonpareil. While the Nonpareil lags behind the California types this year, it is still exhibiting good overlap with its associated pollenizers. Many plantings of the Carmel and Monterey varieties are presenting a significant proportion of their buds in the advanced pink tip or popcorn stages, poised to move quickly into bloom. Late blooming Butte and Padre also have the majority of the buds in the pink tip and popcorn stages, with the first flowers on both just beginning to make their appearance.

The Modesto Irrigation District has announced that it will begin water deliveries on March 5th. Other local irrigation districts managers will be meeting in the coming days to determine the start of their delivery season. U.S. Bureau of Reclamation officials have announced that the initial water allocation for growers receiving supplies from the federal water system will be 25% of contracted amounts. Relatively low snowpack levels in the Sierra Nevada watershed, combined with pumping restrictions in the Sacramento-San Joaquin River Delta intended to protect Delta Smelt have conspired to reduce the amount of water farmers are expected to receive this year.

The southern region enjoyed another day of warm, calm conditions on Wednesday, providing an additional day of good pollination opportunities. Morning low temperatures were widely reported in the mid 30’s at sunrise. Unlike the previous day, when temperatures recovered slowly, readings on Wednesday warmed quickly, allowing the bees to leave their hives by mid-morning. Observers reported that the maximum temperatures, which reached into the mid and upper 60’s lasted fairly late in the day, provided the bees with a few more minutes of flight opportunities. As a result, observers noted that the bees put in from 8 to 9 hours of excellent activity for the day.

The southern region’s bloom continues on its steady pace of development, benefitting greatly from the warming temperatures. The Sonora is now at its peak bloom and is starting to shed the first of its spent petals from the trees. Meanwhile, the pace of the Nonpareil has been the subject of many discussions around the region. While this major variety is presenting a steadily increasing percentage of its flowers for pollination, growers are saying that the pace of its evolution has been quite leisurely this year, when compared to it associate pollenizer varieties. Some have even described the evolution from pink tip to full open bloom as “painfully slow”. California type plantings such as the Fritz, Aldrich and Price have been running well ahead of the Nonpareil in many areas of the southern San Joaquin, although the overlap between the two types has still been quite good. Monterey also leads the Nonpareil this year, while late blooming Butte and Padre are well aligned with each other in all areas of the region.

The threat of rain in the coming week has inspired growers to begin treatments with preventative fungicides. Growers will work to ensure that they have adequate levels of protection prior to the arrival of the rain.

U.S. Bureau of Reclamation officials have announced that the initial water allocation for growers receiving their supplies from the federal water system will be 25% of contracted amounts. Relatively low snowpack levels in the Sierra Nevada watershed, combined with pumping restrictions in the Sacramento-San Joaquin River Delta intended to protect Delta Smelt have conspired to reduce the amount of water farmers are expected to receive this year. This is of critical importance to growers along the west side who receive their water from the federal Central Valley Project.