This report covers conditions and observations made between Monday, March 31 and Sunday, April 27, 2014. The next report is scheduled for Monday, May 26, 2014. However, in the event of any significant occurrences prior to that date, this site will be updated as soon as possible. 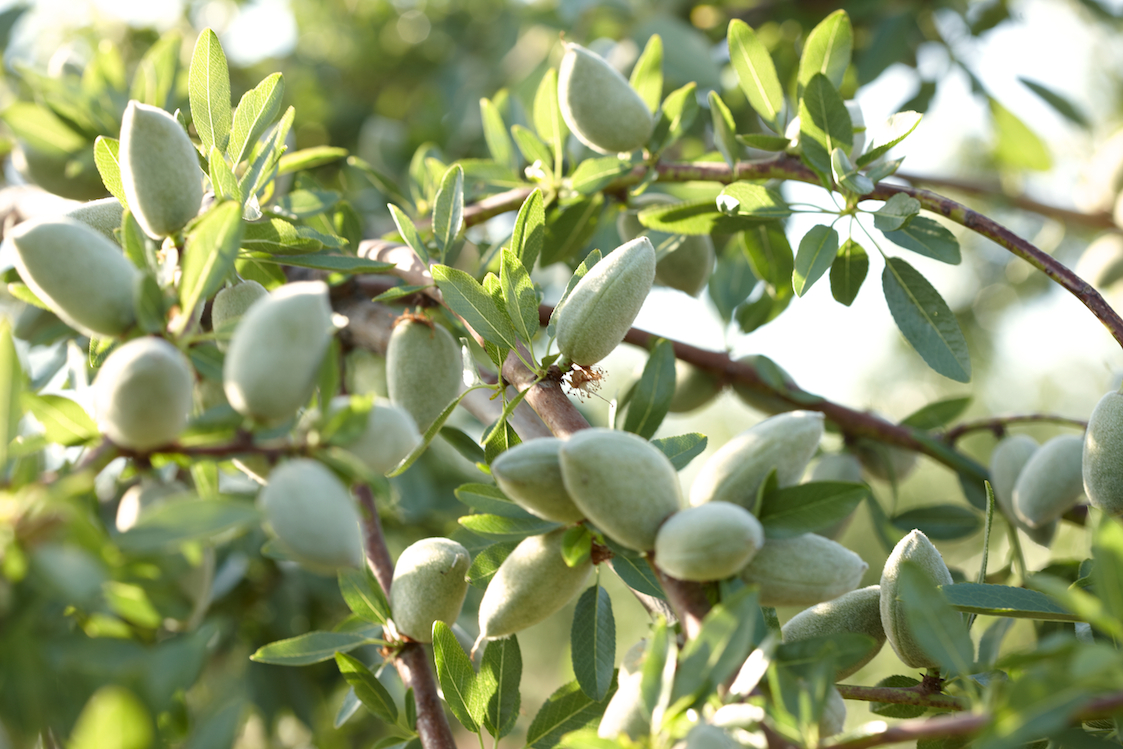 Generally good weather reigned over the almond growing region during April, with storm systems bringing clouds and rainfall to the orchards in the period’s opening and closing days. Daily maximum temperatures climbed quickly from their chilliest levels in the low to mid 50’s as the period began, reaching into the upper 70’s to mid 80’s where they remained for the majority of the period.

Official rainfall totals ranged from 1.0 inch to as much as 2.5 inches in the north to 0.5 to 1.0 inches in the central part of the region, with additional amounts falling from thunderstorms that roamed the region, dropping heavy rain and occasional hail. While some growers reported locally significant hail damage to their crops, widespread losses have not been reported. Owing to its geographic location, the southern part of the region’s rainfall totals for the month was much lower than in the other growing regions.

Almond crop developing well – Observers have reported that the almond crop in the Sacramento Valley is developing well under the influence of the generally good weather conditions. Above average temperatures and adequate sunshine have combined to provide good support for the crop while also helping to reduce disease pressure. Many orchards have been shedding nuts that the trees are unable to carry to maturity, a normal process that typically occurs in greater amounts in the Carmel, California types and Butte/Padre plantings than in the Nonpareil. Observers and growers alike are reporting that they believe the crop to be approximately ten days ahead of last year.

In the central region, Nonpareil nuts along the west side have reached their full size and have begun to solidify. The date at which the first nuts are fully solidified will provide the best reference of maturity and an indication of the start of the harvest. Growers and observers in this area believe that the crop is running approximately one week ahead of last year.

Beneficial weather conditions for the majority of the period have allowed growers to complete required orchard tasks with few difficulties. Fertilizers have been applied as needed, as have fungicide treatments designed to prevent disease infections on the crop as well as the trees. In the north, pressure from insect pests has been low this year and to this point, few difficulties have been encountered.

Water remains a prime concern – for all in the Sacramento Valley. Rainfall during March and April has provided some degree of relief in the form of a small amount of additional run-off captured for storage. Both the State Water Project and the federal Central Valley Project have increased allocations to 5% of contracted amounts, while Sacramento Valley growers sourcing their water from districts known as the Settlement Contractors have seen their allocations increased to 75%. For the growers served by the state system, the 5% allocation will not be available until after September 1. Most growers have been working to ensure that their privately owned wells are in good condition as they will be depending heavily upon groundwater in order to complete the 2014 growing season.

In the central part of the region deliveries from local irrigation districts began during the period, with farmers in the Turlock Irrigation District seeing their canals filled on April 10 while those in the Modesto District were able to receive water on April 15. Growers in the Merced Irrigation District did not receive their first deliveries until April 21 and will receive only a six inch allocation this year. During the final week of the period, management of the State Water Project increased its allocation to growers from zero to 5% of contracted amounts. Most believe that the increased allotment will help only those growers north of Fresno and even then not significantly as the water will not be available until after September 1.

Many growers are highly dependent on privately owned deep wells for their water this year. In addition to being quite expensive, ground water can also be of questionable quality, with the most serious problems presented by high pH and dissolved salts which can create  a significant yellowing of the leaf tissue as the excessively alkaline water ties up the nutrients needed for crop development. In addition to the rather striking color, these orchards are exhibiting a lack of spur development.

Growers in the most severely impacted areas are managing what water they do have very tightly. For some, rather than managing with an eye towards maximizing yield, the goal has become to maintain the orchard and keep the trees alive. Some plantings are already exhibiting moderate signs of stress as their owners implement deficit irrigation strategies.

Further south, the puzzle of water rights and allocations that make up the San Joaquin Valley, the Exchange Contractors on the valley’s west side have rights to the water in Millerton Reservoir near Fresno if they are unable to secure their normal supplies. Millerton’s water normally supplies growers along the east side of the valley, serving the Madera and Fresno Irrigation Districts as well as other districts to the south via the Friant-Kern Canal. According to published reports approximately 410,000 acre feet of water has been pumped from the Delta and stored in San Luis Reservoir near Los Banos on the west side of Merced County as the run-off from the March and April storms passed through the Delta. If an additional 300,000 acre-feet could be pumped and stored, the Exchange Contractors would not need to source supplies from Millerton, making that water available to east side growers.

Groundwater supplies will be critical to growers in the southern San Joaquin. Some have already reported difficulties with their wells. Pump and well companies are working around the clock to maintain systems and have been unable to keep up with the demand for service. Excessive stress has not yet been reported, but will most certainly appear as we move into the late spring and summer months.